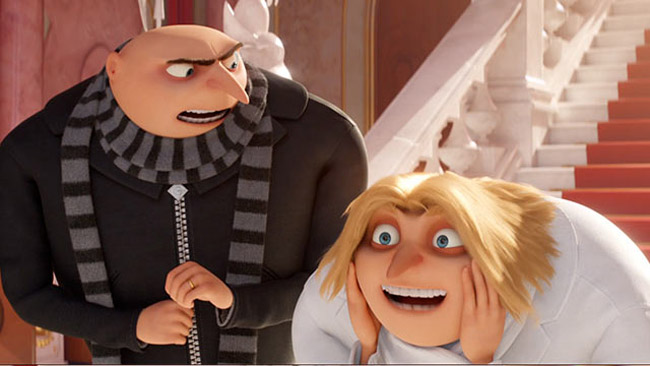 Illumination are back with their lovable minions with a side of evil turned good guy Gru in the third outing of the funtastic Despicable Me, but this time it’s an all-out extended family affair with a soupcon of 80’s flair for any nostalgic parent.

Despicable Me 3 is still full of fun, silliness and adorable cuteness, but what made this such a delightful franchise is now starting to run a bit thin on the ground, raising the question could Gru (voiced by Steve Carrell) and his minion crew be ready to hang up their poptastic throne with the narrative taking five different routes which meet somewhere in the middle, and certain characters like Kristen Wiig’s Lucy, wife of Gru, taking somewhat of a backseat trying to play mother to gain the love and respect of the girls.

The Despicable Me world is now plagued with a new evil enemy in failed 80’s child icon, Balthazar Bratt (voiced by Trey Parker), adopting his evil childhood TV persona in his adulthood and very much rejected by Hollywood, the all dancing bubble-gum spouting villain, accompanied by the sounds of Michael Jackson’s Bad, and Madonna’s Into The Groove to complete the dance fight sequences, is out for revenge for being kicked to the curb. Now part of the AVL, the Anti-Villain League, Gru and Lucy lead the charge in taking Bratt down, that is until they are unceremoniously kicked out the force by its new fierce female leader, but that doesn’t deter Gru especially after he finds out he has a long-lost twin, Dru.

Dru is Gru’s (both voiced by Carrell) complete opposite with a head full of blonde flowing locks and completely useless at the villain game. There is a hint of sibling rivalry from the onset of their meeting when the grumpy Gru witnesses his family’s affection for his new found brother but this doesn’t last long as the pair begins to bond on their own little adventure that revolves around taking Bratt down.  Don’t threat the beloved Minions get their own little storyline too, even though taking a back seat to Gru’s, they steal the show with their own revolution against Gru for his departure from the world of villainy which subsequently see’s them jailed and become the Kingpins of the jailhouse. Even the baby of the film, Agnes, has her own precious and adorable cute moment on her quest to find a real-life fluffy unicorn.

It’s a strong showing for the Despicable Me 3 crew of directors Pierre Coffin and Kyle Balda, but the cracks are starting to appear. The soundtrack made up of pure 80’s pop classics and the original’s from Pharrell gives it the despicable seal of approval that will delight both its intended child audience and the legions of adults that have a special soft spot in their hearts whether they admit it or not.

Despicable Me 3 is in cinemas June 30