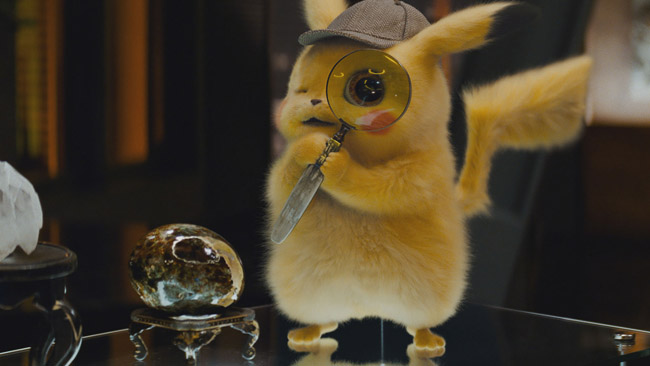 Pays service to the Pokémon fan base but it’s Ryan Reynolds Pikachu that injects the fun.

If you’ve been living under a rock for the past twenty odd years, the latest big screen incarnation of the Pokémon phenomenon could wash right over your head. Over the years a number of films and TV shows have tried to give life to the success of the cute little gaming character and fell flat and their faces but thanks to Ryan Reynolds alone – and I say that loudly – this Pikachu ride is a lot more fun than it should be.

Set in the distant future, in a Blade Runneresque town called Ryme City, Pokémon and humans live side by side thanks to a multinational corporation run by Bill Nighy’s Howard Clifford and his son. Neither species understands the other but each human has their very own quirky Pokémon companion.  But there is something quite sinister bubbling under the surface which Tim (Justice Smith) finds out all too soon after arriving in the city to find out how his father died.

Pikachu (Ryan Reynolds) has had a much-needed upgrade, for those in the know; the cute, yellow furry animal was always a loyal pet with a limited vocabulary and the ability to produce energy pulses that could throw you across a room. Reynolds Pikachu is exactly what you would expect from the wisecracking Deadpool actor, having found his voice the only other being able to understand what he is saying is Tim. He still has his abilities but he has also gained a caffeine addiction and learnt the use of irony and snappy wit.

With constant reminders of Robert Zemeckis’ Who Framed Roger Rabbit bouncing through the inspiration for the movie, this is exactly what it says on the tin, a fantasy crime comedy in the frames of a detective noir picture. Pikachu, who seems to be suffering from amnesia teams up with Tim and a teen reporter to try and uncover what really happened to Tim’s father and in doing so unearths a world-threatening takeover.

Without Reynolds infectious energy and quick sharp burst of wit, there would be nothing but a dull pulse pumping through its veins. Credit has to be given for its dealings with Tim’s Father Issues, having lost his mother at an early age, his Father was nothing but a myth in his life and these issues of abandonment, regret and eventual forgiveness are dealt with respectfully but never weigh it down in too much gloom and doom.

Filmmaker Rob Letterman’s pays service to the Pokémon fan base with enough nods and winks for its supporting furry animals but for those not in the know, certain elements could fly over your head but at least Reynolds keeps that silly fun rolling.

Detective Pikachu is out in cinemas May 10th