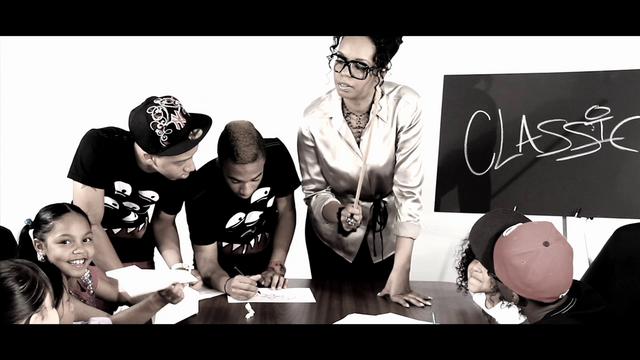 From the Outsiderz to the high energy and bars galore Flipmode Squad, Rah Digga has always been about straight spitting. In truth whilst she stood out for being a female emcee who not only held her own but turned many a male rapper into her ‘bitches’ she still (one can argue) was over shadowed by the ‘click’.

Her departure from Flipmode seemed to spell the end of Digga and her slightly husky delivery and killer punchlines. But a whole ten year since her last album and Digga is back with her album, Classic.

The first single This Aint No Little Kid Rap signals her growth as a person a rapper and evidently points to a lady ready to make her mark as a ‘lone soldier’ as she spits hard against the present day music scene.  Now it is not that I do not love Nicki Minaj because I love her over the top, swaggerlicious self but it will be great to see if Digga can bring a welcome balance and added presence to the US female emcee game that seems decidedly thin on the ground. ‘There are not many female emcees on the scene as such. I mean there are plenty of females that have been rocking since the beginning of time but they are not getting the exposure they need. Jean Grae is a personal favourite of mine who does not get that exposure. The media these days wants to attribute the emergence of Nicki Minaj as female rappers all of a sudden rapping. No they are not rapping all of a sudden it is that you just have not been paying attention.’

But what the hell has this lady who seemed destined for individual success back in the day been up to?

‘I went to California for a few years I was taking some acting lessons and I was seriously considering diving back into the acting career. I came back and I attended the New York film academy where I became a certified editor and producer and I really had plans on becoming a fully fledged editor. But the music kept calling me and lo and behold here I am.’

The music business particularly of today is high octane and un-forgiving. If you are out of the public’s psyche for more than a year it will be like you were almost never there. But somehow it seems (particularly for me as someone that was checking Digga in her early days) that she has never been away (excuse the irritating cliché), ‘Everything Is Story was supposed to be released in 2004 it obviously never got released commercially and so I am happy that people are still anxious to hear me. I know people wondered if I was ever going to make anything again particularly when I announced my departure from Flipmode in 2007.’

Talking to other US hip-hop artists, there appears to be an ever so slight revolution against the mainstream hip-hop of today as ‘old skool’ vies to be ‘new skool’ and Digga is not different in her disappointment with hip-hop’s  trajectory, ‘I think that there is still a large body of artists that still make the type of hip-hop I make the hip-hop that I prefer to listen to but in terms of what gets publicised then there is a definite inequality’ she adds, ‘I would like to see more public Enemy, KRS 1 being pushed to the front. I think that once hip-hop became so commercialised, then that classic vibe became too radical to do in hip-hop and I miss it. I am just disappointed that hip-hop today just teaches kids to be strippers and gangbangers. It is sad.’ With Nottz (an equally fierce believer in the old skool) Digga has the perfect production ally on her album. ‘I called it Classic because I wanted to make sure that the album embodied that classic, hip-hop feel that everyone misses and loves so much and complains that there is not enough of it. I went out on a limb and worked with one producer (Nottz) I did not feature any cameos. It just reminds of how hip-hop used to be with the days of Gangstarr, Erik B and Rakim who worked with one producer.’

Aside from music politic I sense her ten years out of the scene helped to re-ignite her fire. Certainly while talking to her she seems definitely happy and excited about stepping out in this new musical landscape, ‘it is just great to know that folks out there still love me. I really did not realise how much I missed music until I actually starting doing it again and this album has just been a joy to make. I executively produced the album, I had creative control over the whole album and I did not have to worry about A and R’s breathing down my neck. I had control to make a whole album of street spitting if I wanted to.’

And in terms of another ten year gap: ‘Definitely not, I am working as we speak. The plans will be to do a remix, a re-issue featuring some of my favourite lyricists on the tracks from the album. My next single will be a remix with Redman on This Aint No Little Kid Rap and then for Check me Boo it will definitely be a female line-up, probably Jean Grae and I have reached out to Eve. It really is a time sensitive thing. Whoever reaches out to me first I will probably roll with. I actually saw a rumour that I was dropping three albums so I thought I better get started,’ she says through laughter.

I nearly forgot if you were wondering, what about Flipmode?

‘I do not see the original Flipmode ever coming back. The love is still there but sometimes the past is better left as the past.’