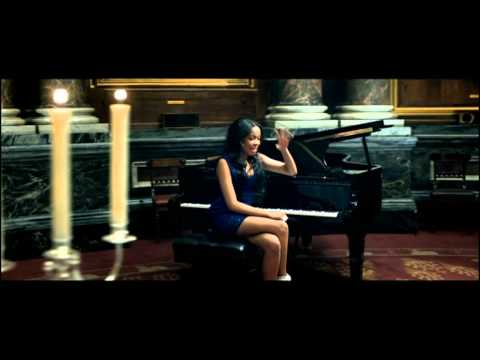 Just over two years ago, Dionne Bromfield blew the recording industry away at the age of 13, with her 2009 chart-topping single ‘Mama Said’. Before her huge hit, the petite, angelic-voiced, pop-soul star was just another school girl – apart from the fact she had a world-famous Grammy award-winning godmother.

Since been discovered and signed to Lioness Records, owned by Amy Winehouse (yes, the godmother), Dionne has become an overnight hit, with her debut album Introducing, which features a collection of Motown tracks. Now working on her sophomore album Good For The Soul, she has teamed up with Diggy Simmons (son of Rev Run from Run DMC) on her new single ‘Yeah Right’.

Flavour catches up with the teen sensation to discuss her relationship with the ‘Rehab’ singer, working with the son of hip-hop royalty and which stars she’d invite for a sleepover.

For anyone who hasn’t yet heard of you, describe your sound?
Well, my sound is pretty soulful, with a mixture of R&B and influences from the 60s, with a very mature vibe.

What’s your relationship like with Amy Winehouse? Do you have much in common?
Oh yeah, we have loads in common, especially as we both like the same sort of music. We always do lots of girly things together and sometimes Amy tends to call me her older sister, which is really funny [laughs].

What’s it like having Amy as your godmother, friend and boss?
She’s actually more like my fairy godmother. I mean, I have never seen Amy as my boss, I just see her more as my godmother.

Your debut single ‘Mama Said’ was hugely successful. What do you think accounts for its success?
I think the help that I received from Amy really boosted the single, especially as there were a lot of electronic music and pop artists, like Lady Gaga, dominating the charts at the time. The song sort of also had its own sound, which played a big part in helping it stand out from the others.

OK, we’re going to be corny and ask – what was the last thing your mama said to you?
[Laughs] The last thing I remember her saying to me was, ‘Dionne, go and get ready.’

Cover versions of well-known songs have played a huge part in your music. How do you know what works best?
With the covers, I tend to choose the songs I really like, which were mainly what my mum and Amy would play around the house. They were really fun songs that I enjoyed singing and also listening to as well.

Tell us about your brand new single ‘Yeah Right’, featuring Diggy Simmons. How did the collaboration come about?
The song was produced by Paul O’Duffy, who did Amy’s Back to Black album, and Eg White, who wrote Adele’s first album. I remember being in the studio with Paul, who was talking about Diggy, who I had already heard of as he used to be in the Rev Run TV show. I really didn’t know he was a rapper until they mentioned him on a track, and after looking him up on YouTube, I was blown away. I remember performing in Birmingham, when I got the track sent through to me with Diggy rapping on it. Once I heard it, I was like, oh my God, this is amazing!

What can we expect from your new album Good For The Soul?
You will hear a lot of personal stuff, which gives an insight into my life. A lot of people think the songs are going to be about me, but they won’t; instead they are about personal stuff I have seen from people close to me. I think the vibe of the album will fit in with that Plan B, Paloma Faith and Duffy kind of sound.

We recently saw Willow Smith and Justin Bieber storming the charts with their catchy pop songs. Are you aiming to do the same?
I really hope so as it would be great to be up there with both Justin and Willow. I would also love to work with either of them, as they are super-cool. Justin Bieber is best friends with Diggy, so who knows?

How do you balance your school work with your music career?
Sometimes it is hard, especially as I am doing my GCSEs at this point; it is a bit difficult taking in all the work plus doing the music. However, the school I go to is really good as they work around my schedule and also understand my work ethic.

What is a typical day like for a rising teenage star?
If it’s a weekday, I go to school, and then after school, I am either working in the studio practising or doing a showcase for the record label. Usually by 7 o’clock, I am on my way home to do my homework.

Which four celebrities would you like to invite for a sleepover?
Miley Cyrus, Vanessa White from The Saturdays, Pixie Lott and Willow Smith – so we can all whip our hair back and fourth.