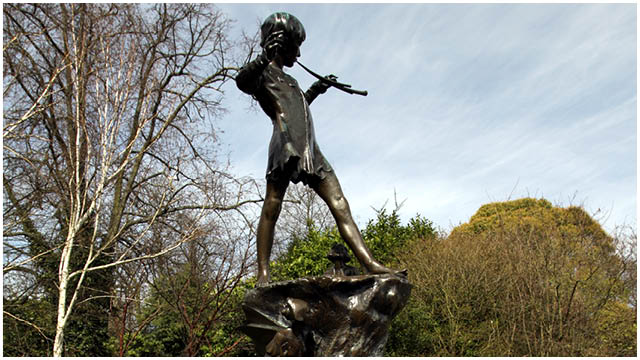 Toy shops, adventure playgrounds, animal farms… Who says children should have all the fun? There are a host of attractions across the capital that appeal to adults and kids alike, and that take us grown-ups back to our childhood memories!

Read on for our pick of five of the finest…

Fancy trying your hand at some Tarzan-like swings or soaring across the air on an epic zip wire? Or how about having a go at some adrenaline-pumping skateboard zip lines (not for the faint-hearted)? Go Ape is a tree-top adventure that kids and adults alike can get lost in for hours – nay, days. And even better news: the adventure park is located just 10 minutes away from Cockfosters station at the end of the Piccadilly line. Get ready for a fun-filled day with your tribe!

Yes, this is the very platform Harry Potter used to get to his wizarding school, Hogwarts. Although not an actual film location, this brown brick wall in one of the busiest stations in the country has become a magnet to Harry Potter fans from all over the world. To the delight of devotees, station staff have even taken the trouble to create a special platform sign and a luggage cart that looks like it’s disappearing through the wall. Grown-up Harry Potter fans should also check out the Warner Brothers Studios in Leavesden for plenty more Muggle-friendly magic.

Ok, so the fun of riding on the tube wears off pretty quickly when you’re a grown up who has to commute in the capital every day. But how about if you got the chance to actually drive the train, instead – that already sounds more appealing! You can do exactly that, at the London Transport Museum, which has a simulator that lets you take the controls of a virtual tube train. Toot toot!

Some animals get a bad reputation – and pigs suffer more than most. But much of what you’ve heard about these farmyard animals is untrue – for example, dirty and smelly they are not! They are in fact among the cleanest, most intelligent species on the planet. Sniff them for yourselves at Hackney City Farm, home to Britain’s only red breed of pig.

And finally, how about a visit to a statue that will truly take you back to your childhood? The Peter Pan Statue is found tucked away in Kensington Gardens, just to the west of the Long Water. Built in the gardens in 1912, the statue is situated at the exact spot described in one of the Peter Pan tales, where Peter flies out of his nursery and lands in these very gardens. Magical.

So it would seem that London caters for your inner child in more ways than you can possibly imagine. It’s time to get your friends together and relive your childhood in this amazing city!