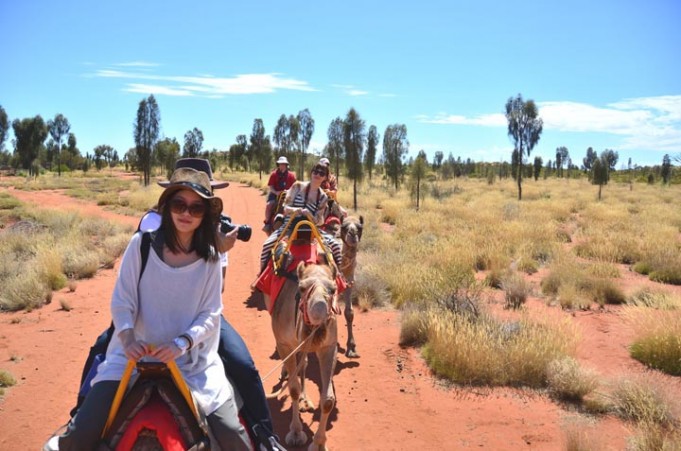 Uluru is what I envision a retirement village to be like, expensive and full of old people. Although I was lucky enough to have scored some pretty cheap flights to Ayers Rock Resort Airport, I didn’t anticipate just how expensive it would be.

When we first landed, my first thought was have I landed in Mars? And where exactly was the airport? The little building we walked through seemed somewhat more of a shelter than an actual airport. Anyway, luckily the airport transfers were free, so I hoped on the shuttle, and made my way to the Outback Pioneer Lodge. With a dorm for 20 at a cost of $38.00 (AUD) per night, my first thought was there was no need to ask for wifi. Right? As it was one of the most expensive dorms I have ever stayed it, I surely thought it was included. How wrong I was. There was an extra cost to use the wifi, and that’s pretty much when I figured out it wouldn’t be a cheap holiday even on a budget.

The lodge itself was great, had a swimming pool for the hot days, and a bar with a live band playing at night. Although it got quite noisy at night time, every other time was extra quiet.

I didn’t quite anticipate just how I was getting to Uluru as of yet, but with a little bit of research and a chat with a French tourist, I figured out that the only way to get around, was to use one of the companies that provide a shuttle service. To get to Uluru which was only 30 minutes away mind you, would cost a lovely $60.00 return. You could of course buy packages, costing up to $200.00 to use the shuttles as many times as you like within two to three days. Bargain right? This of course, does not include the national park fee of $25.00.

So I sat back, relaxed, kept my money in my pocket for the time being and adventured around the town, with the lovely free shuttle. The town centre itself is pretty small, with a little IGA to buy your groceries, a tourist centre, and a few cafes and restaurants to wet your palette.

During the day you could find a few free activities held by local Aboriginals, including dancing, hunting talks, boomerang throwing and markets. My very first adventure I decided was to do the sunrise camel ride, because why not? It cost me $125.00 (AUD), including tea and damper bread for breakfast. So I got up at 5am, got the bus to the camel farm, and realised it was full of couples. I had no idea, is there a unwritten law that we are supposed to be a couple to ride a camel? Anyway I was the last one to get on the camel, it felt a wee bit like being picked last at football game, but I wasn’t hurt. It was just me and my camel rolling through Uluru and no-one else mattered.

Chats with the local tour guide was interesting, along with the lead camel deciding he wanted a break every now and then and going up to eat some leaves off a tree. I found out that they race camels, and that the camel behind me was super famous as it had won quite a few.

Camels smell, and I guess they can’t help that, but the view was stunning. It overlooked beautiful Uluru and Kata Tjuta. Definitely worth the money and of course it was just one of those experiences I don’t think I would do again.

Many days were spent by the pool, as after a while you come to realise there isn’t much else to have a look at if you don’t have your own car. The dessert gets so hot, most of the time you’re either shoeing away a fly or cooling yourself down by the pool. Eventually I decided it was time for me to see the sights, I had mentally prepared myself for the 10km walk around Uluru and the 8km walk around the Kata Tjuta. I booked to see Kata during sunrise and walk around the place afterwards. Luckily as it was still morning, the heat wasn’t too much of a factor when walking. I am not quite sure how the older people were doing the walk, it was so rocky, that any wrong step could leave you with a sprained ankle. Is it possible to rock climb on a flat surface? If it is, that’s exactly what it felt like, at one stage I was jumping from one rock to another. Seeing Kata was much more than I expected, it is actually 200m taller than Uluru, and the having a look at the different dunes was astonishing. Absolutely breath-taking, well after you’ve had a wee rest of course. I finished it with 45 minutes to spare until it was time for the bus to leave. Thankful for the experience and for not having flies gathered around my face.

The Uluru walk was different, it at this stage it was 33 degrees, steaming hot. The bus tour guide advised me strongly against walking around the base. I agreed, but I knew that I would disobey his orders and end up walking the base against his wishes. There were so many sacred men’s and women’s sections that I wasn’t allowed to take too many pictures, but Uluru was bigger than I thought it would be. The walk itself was a one in a lifetime experience, seeing paintings, walking into caves, and really experiencing how the Aboriginals used to use Uluru back in the day. Actually they still do sacred men’s business now, rarely, but when they do they shut down the whole national park.

I finished the walk surprisingly, with flies in my face constantly, and my skin burning by the sun. The only wildlife I saw was a lizard, and to my surprise even though the Aboriginals are against people climbing the rock, you are still allowed to do it though. There is barely any support, and in fact up to 53 people have died from climbing it, it looks so steep I have no idea how anyone does it. A few people were on their bums coming on their way down as I imagine it would be easy to go up, but frightening to go back down. As I watched people do it, I was surprised with what kind of people were doing it. It was mainly 40-year-old Japanese tourists! High-fiving each other as they came back down alive. Mental. My Uluru walk was finished off by a sunset view of the rock. The sky changes so many colours it’s so hard to keep up, changes ever so slightly that you can only really see it properly if you record it and watch it back again.

The people that work there were lovely, one of the tour guides who has been working there for 7 years said sometimes he has to pinch himself to remind him that this was his job. I was fairly disappointed that I didn’t see much local indigenous people, but I guess they would want to be kept alone as it’s such a busy place.

The rest of my days were spent by the pool, watching the free outdoor films that play in the amphitheatre at town centre, and watching the stars. I’d never seen so many stars, so clear, so sparkling it made me feel at ease. At one stage I saw a shooting star. I would never get tired of watching the sunsets and sunrises over Uluru and Kata, and I often wondered to myself are we so busy in our lives that we forget to look up?