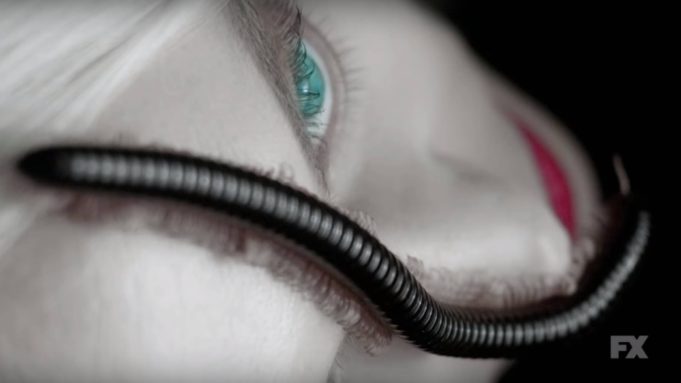 As the multi award winning TV show returns for a sixth season, we see a return of the cast who have featured in the popular series which spans different stories, decades and characters all somehow intertwined.

The first season centres on Dr Ben Harmon, and his family, wife Vivien and their daughter Violet, who have moved to Los Angeles from Boston. Haunted by their own past, the family moved into a restored mansion which is troubled by ghosts of former residents and their victims.

The family have to not only contend with hauntings in their new home but also conflicts stemming from the family’s own past including affairs and miscarriages. As Dr Harmon begins to see patients in his home, some are not all that they seem; some are not even alive.

As the spirits entwine with the Harmon family, everyone’s past is laid bare and revenge sought from families involved and the spirits themselves.

Set at the Briarcliff Mental Institution in Massachusetts in 1964, this series follows the patients, doctors, and nuns resident there. Patients and staff face many dangers not just from their own past, but from those who are there to treat the patients specifically the sadistic scientist Dr Arden and the secret serial killer Dr Thredson.

The series is set in the present day and introduces newlywed couple, Teresa and Leo, who are exploring the now-abandoned Briarcliff Manor. However flashbacks to 1964 show former patients and staff, explaining the history of the former asylum, whilst the present shows the explorers being attacked by a former patient.

The first few episodes flash back and forward entwining the past and present, and with them, Teresa and Leo. The story concludes with the past patients and staff facing the demons from the past with deathly consequences.

Focusing on a Coven of Salem descendants who live at Miss Robichaux’s Academy in New Orleans. The academy is a home for young girls which they join after they become aware of their differing powers. The academy is run by headmistress Cordelia Foxx whose mother is the Coven’s ‘Supreme’ -a witch born every generation who embodies specific gifts and magical abilities known as the Seven Wonders of Witchcraft.

The girls learn to control and use their powers, whilst working on how to find the next Supreme, whilst the current Supreme Fiona tries, in vain, to regain her youth and cure herself of the cancer caused by a new supreme rising. Also in New Orleans is the Voodoo priestess Marie Laveau who is immortal thanks to a deal with the voodoo devil, Papa Legba.

The Voodoo priestess and the Coven are mortal enemies and find themselves in battle over slave killer Delphine LaLaurie and keeping their secrets safe. The Coven aim to find the next Supreme with the test of Seven Wonders.

A Freak Show troupe settle in Jupiter, Florida in 1952, called Fräulein Elsa’s Cabinet of Curiosities; her performers include the bearded lady, her lobster-handed son, and his three-breasted hermaphrodite wife, as well as their newest stars, conjoined twin sisters. Unfortunately the troupe also bring with them serial killer Twisty the Clown.

With the troupe causing a stir in town and the serial killer clown picking off people, the freaks are not welcomed by anyone, except that is for Dandy and his wealthy widow mother who want to buy the conjoined twins. Secrets of the freaks show performers past are brought up, towns people fear for their life and an old urban legends come true.

As the troupe are picked off one by one, by a serial killer and their own, the show starts to come to an end with a flash forward revealing the fate of Elsa, and what the future holds for those remaining.

The events of this season circle around the Hotel Cortez in Downtown Los Angeles, California, set in the present day after the hotel is purchased by New York fashion designer, Will Drake. Like previous seasons there are flashbacks to show the storylines behind each character and their lives are unsurprisingly not all they seem, with many trapped in the confines of the hotel and those that can leave not wanting to.

At the centre of the hotel is Detective John Lowe who initially is drawn to the hotel after a series of murders which are linked the Ten Commandments. However the detective is also linked personally to the hotel, through the disappearance of his young son Holden. The inspiration for this season came from classic horror films and real life events of hotels in LA which have a seedy underbelly.

As with other seasons, certain parts intertwine with past stories, so keep an eye out for recurring characters as well as some famous faces and names from Hollywood’s golden era and history.