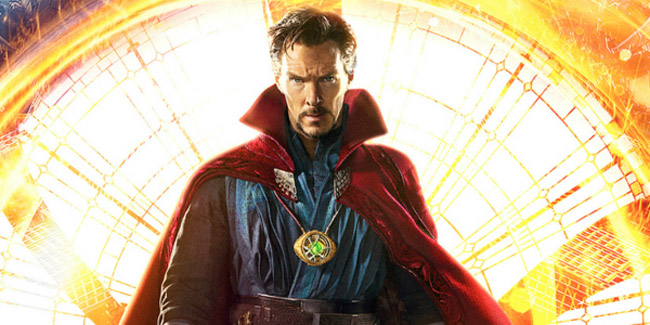 Marvel have pulled another corker out the bag with Doctor Strange, this time entering the world of the spiritual and supernatural with mind-bending and spectacular visuals which see’s buildings and cities rotating and folding in on themselves with jaw-dropping excellence. It’s their most visually ambitious, eye-popping outing.

Doctor Strange is very much an origin story; we are introduced to the weirdly endearing yet smug and arrogant Stephen Strange (Benedict Cumberbatch) at the height of his surgical career – a character who is almost identical to Iron Man’s Tony Stark -, Top of his game, looking down on those who don’t seem quite capable – including Dr Nicodemus West (Michael Stuhlberg) who looks on in awe at his greatness. Joined at his side is ever loyal ex-girlfriend Dr. Christine Palmer (Rachel McAdams).

After a life-changing accident takes away the use of his most precious tools – his hands – Strange travels to Nepal where he has been told there is a necromancer who can heal him. The Ancient One comes in the form of steely faced and shaven Tilda Swinton flanked by Masters and students Mordo (Chiwetel Ejiofor) and Wong (Benedict Wong). Standing for none of his arrogance she reluctantly agrees to teach him the mystical and magical teachings including astral projection. It soon comes to pass that the Ancient One and the world as we know it is under threat from one of her previous students, Kaecilius played by Mad Mikkelsen donning some funky eye makeup which would go down a storm at any Halloween party as he has switched to the dark side. Strange, who has proven his ability as a Master and one that is destined for greater things go into battle to save the world.

With time-travelling motions and portals that instantly transform people to another location, Doctor Strange is full of magnificent Marvel magic, Stan Lee makes his cameo appearance on board a city bus as Strange and Mordo crash face first into its window and the skyline of New York gives a subtle view of the Avengers Tower. This veteran cast of actors give it the class and humour we come to expect with absolutely fine performances.

What would a Marvel film be without its witty and clever script? Doctor Strange is riddled with tons of hilarious one-liners and deadpan side glances from Cumberbatch – which he delivers with magical precision – which will have you snorting your way through the blistering entertainment, ‘What’s this? My mantra?’ asks Doctor Strange – ‘No, it’s the wifi password; we aren’t savages’ replies Mordo. Even when Strange is introduced to Wong (Benedict Wong) they have a witty repertoire involving artists with only one name such as Adele and Beyonce – cut to Wong sat in the library, headphones in listening to Beyonce. Oh and if you know anything about Marvel films you never leave your seat until the lights come up! We aren’t just treated to one extra scene but two and one includes Chris Hemsworth as Thor. A very warm welcome to the MCU film franchise Doctor Strange and Benedict Cumberbatch – We Love You.

Doctor Strange is out NOW.