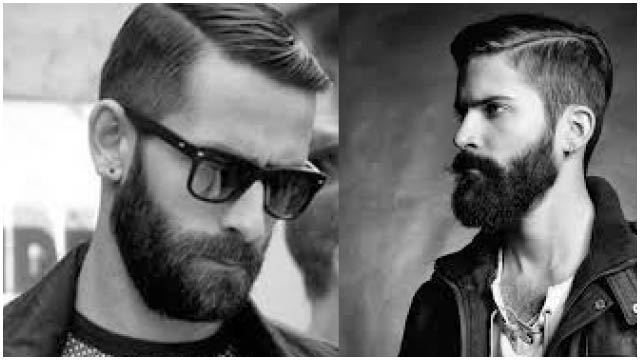 They’re everywhere lately, from George Clooney’s silver foxy look to Ryan Gosling’s elegant scruffiness. Beards are hot on the Hollywood red carpet right now, and it seems like every man out there is going for the lumbersexual look.

So why the beards, guys? Well, apparently it’s pretty basic (how could it not be) – men want beards to compete against other men, and attract the ladies.

The biology of beards

A recent study has found that male primates in many species often develop increasingly visible “badges” to show their strength and virility, and to give them the edge over other males.   Animals that do this include male orangutans that develop huge cheek-flanges, proboscis monkeys – the longer the nose, the better, and of course, human males, who compete for the bushiest, longest beard.

Men are keen to grow beards, but do women actually like them? Apparently two thirds of women would prefer to date a bearded man over a clean-shaven man, and 82% of women say bearded men look more masculine. Maybe this survey was done by a special interest beard group! We couldn’t find the study behind this data, but apparently it was conducted by escentual.com, a beauty website. By contrast a study by Gillette found that 74% of women prefer clean shaven men. No surprise there.

Humans being humans, we’ve found ways to make money out of the beard trend. Beard grooming and male cosmetics companies are booming. In the UK, 59% of consumers think it looks unprofessional to have ungroomed facial hair in the workplace, so their facial hair is another area to keep looking stylish and tidy. Products such as styling wax, face and hair oil, and beard shampoo are the new thing in personal care for men.

Is that beard the real thing?

Beards are good for the plastic surgery business, too. In the last ten years, the number of beard transplants performed around the world has increased by a huge 600 percent. At $3,000 to $7,000 per beard transplant, this is a big moneymaker.

Beard transplants have come a long way from the early stages of hair transplants where surgeons transplanted large sections, known as “plugs”. This resulted in a very unnatural effect. These days things are very different – the guy sitting beside you right now could have had a beard transplant and you’d never know.

A facial hair transplantation works in the same way as a regular hair transplant does. Head hair is transplanted from the scalp to facial regions that are missing density and fullness. Here are the basics of a Follicular Unit Extraction (FUE) process, the technique most often used for beard transplants these days:

The whole thing takes around 2 to 5 hours, and your grumpy guy should be able to go home after the second day. A few days after the transplant, a tiny crust forms around each transplanted hair. Within a few weeks, the first transplanted hairs will begin to fall out. And a month or so after that, he’ll be a new man with a full beard.

Risks of a transplant

As with any type of surgery, a beard transplant isn’t completely risk free. It is during the healing process that things most risk going wrong. Luckily, side effects from a hair transplant are usually minor and clear up within a few weeks. They can include:

Luckily, most of the risks around a beard transplant procedure are either fairly minor, or very rare. The majority of medical claims done by men happen when they are prevented from working due to injury, according to a research undertaken by Patient Claim Line. Even if a beard transplant goes wrong, luckily it doesn’t usually stop someone from working.

These days, most hair and beard transplant recipients are happy customers. The biggest issue in hair transplant claims is that the surgeon performed a procedure outside the standard of care rather than whether the patient gets a natural looking result or not. A natural result can only come by picking an experienced surgeon with a keen sense of artistry. If your other half is considering a beard transplant, make sure he picks a surgeon who is experienced and who can produce clear evidence of a great track record.

Have we hit peak beard?

Beards are totally in vogue right now. We can’t count the number of male Hollywood stars that have thrown away their razors to let their facial hair grow free. Along with the growth in beards, there has also been massive growth in beard related goodies and other trimmings. Statistics show that men are increasingly turning to cosmetic surgery to get that perfect beard. For now, the trend is only growing, but have we finally hit peak beard?

One recent study might have it right when they claim that there are now so many guys with facial hair that a beard is no longer unusual enough to be attractive. Those who want the most original look in future might need to head back in the clean-shaven direction. Does your favourite Hollywood honey look better with or without a beard? In the end, only you can decide!