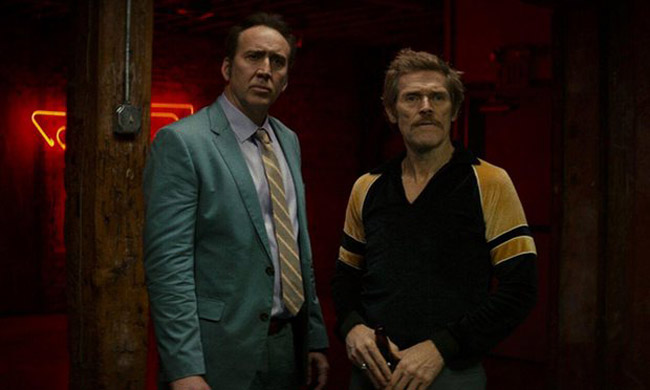 Dog Eat Dog is the latest directorial effort from Paul Schrader, who is perhaps most famous for penning such classics as Taxi Driver, Raging Bull and The Yakuza.

The Martin Scorsese directed Taxi Driver contains Travis Bickle’s infamous monologue in which he proclaims “All the animals come out at night – whores, skunk pussies, buggers, queens, fairies, dopers, junkies. Sick, venal. Someday a real rain’ll come and wash all this scum off the streets”.  Well, be warned because Dog Eat Dog revels in the company of these most unsavory of characters.

A crew of ex-cons played by Nicholas Cage, William Defoe, and Christopher Matthew Cook tries to acclimatize themselves to life outside steel bars in a movie that plays like a repugnant road trip. With each of the three leads playing different degrees of reprehensible, there is an uneasiness to each of their temperaments that make even hanging out with them as a viewer feel dangerous. While there is no doubt that these are morally deplorable characters, it doesn’t take away from the pulpy politically incorrect joy ride of unrestraint that is Dog Eat Dog. We follow these violent vagabonds on a voyage of self-destruction through strip clubs; drug-fueled mayhem and reckless ill-conceived acts of crime.

It is their world and we view it through their moral compass without any virtuous commentary from the director guiding us, which I found most refreshing. Depicting acts of savagery isn’t the same as endorsing them and Schrader is well aware of this, which thankfully allows us to concentrate on the obscene depravity portrayed without a lecture.

Fans of Nicholas Cage will be pleased to know he hits his usual high standards as always. William Defoe is perfect as a dangerous sketchy crack addict that seeks some morsel of redemption despite being an unhinged lunatic. But it is Michael Matthew Cook who turns in the most impressive performance as a nuanced convict who perhaps in another life could have been someone different. He brings a fitting amount of sadness along with intelligence to the role that completes the dynamic between the leads and makes their relationship work.

Dog Eat Dog excels up until that point, but after laying the groundwork, and just as the story is at its most interesting, it falls apart. Much like our central characters, it began to feel over-indulgent, lacking in direction and unravels in a very lackluster and ill-advised manner. The Movie had positioned itself as one of the better Crime/ Dramas of the last number of years up until then but perhaps was one or two drafts away from realizing its potential.