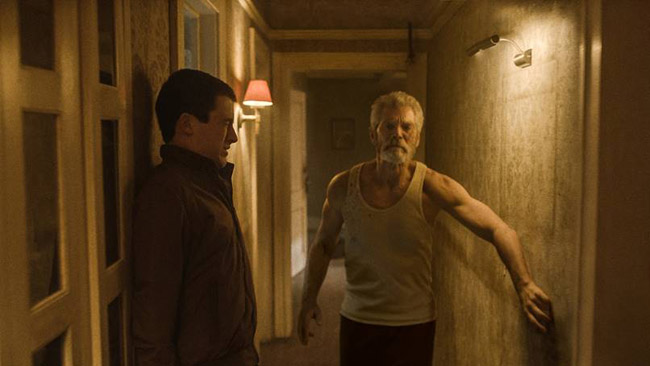 Sometimes simplicity goes a long way, with Don’t Breathe we get just that in this horror/thriller which has buckets of originality in a genre that just churns out the same story over and over again. With nerve-jangling and stomach churning moments it provides a refreshing unpredictability.

Coming from the director who remade Evil Dead back in 2013, which was also his feature debut, Fede Alvarez seems to have a touching affinity to a genre which seems to have nestled itself amongst the living dead over the past few years. Alvarez has breathed life back into it with Don’t Breathe, His sharp eye and technical prowess provide an aplomb of tension building whilst not knowing which characters we should be rooting for.

Three trailer trash teenagers, Alex (Dylan Minnette), whose Dad works for a home security company is vital to their crime spree, Evil Dead’s Jane Levy who play’s Rocky and needs enough cash to leave her broken home with her young sister and her boyfriend Money (Daniel Zovatto), have made a business out of burglary. Their usual targets are empty homes but after hearing about a blind ex-war veteran (Stephen Lang) who is sitting on a pile of money, which he obtained as a pay-off after his daughter was killed, they see a perfect opportunity to make this the job to set them up.

Moralistic values rear its head at this point, can they really rob this poor guy after everything he has been through for their own ends? The answer is yes, as their own needs outweigh his, an easy job with a recluse who lives in an abandoned street what can go wrong? However, once they’ve entered what looks like a derelict house they soon realise The Blind Man isn’t such a pushover. We are taken on a tour of the house with a sweeping shot to give us a taste of the layout of the house and the weaponry he has at his disposal, which the Blind Man takes as his castle and is fully prepared for any intruder. Soon the not so tough teenagers are fighting to get out of the house alive.

What comes across as a simple burglary of a recluse’s home takes a sinister twist, The Blind Man doesn’t seem to be quite the innocent they believed he was as they enter the basement to find a new horror and a disturbing storyline which involves a turkey baster. With a minimal amount of dialogue, our nerves are teased and our senses thrilled on a truly relentless journey which refuses to give its audience any rest bite.

Don’t Breath is out in cinemas September 9