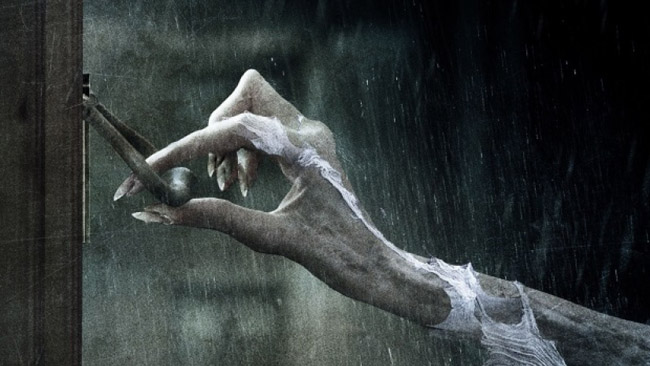 It has become relatively normal to have low expectations for horror films. They’re the genre that suffers the most from an infamous lack of care and creativity.

Luckily, this can lead to some grand surprises, but most of the time they end up being exactly what is anticipated. Don’t Knock Twice didn’t spark a feeling of promise based on its trailer. This perhaps did the film a favour, at least for the first act or so, as stylistic production and a smart concise set-up showed promise. Could this really be the few amongst the many that doesn’t fall for every horror trope?

Successful American sculptor Jess (Katee Sackhoff) returns to the UK, wealthy and happily married, to rebuild her relationship with Chloe (Lucy Boynton), the daughter she was forced to give up back when she was young. Initially uninterested in getting to know her mother, Jess is pleasantly surprised when Chloe comes to stay. Chloe’s intentions of taking shelter with her estranged mother couldn’t be more different – she is terrified of a supernatural curse in the form of the ghost of a mysterious old woman named Ginger. Local legend says that if you knock on her door twice, you’ll be dragged to some form of hellish otherworld.

Whilst Don’t Knock Twice kicks off to a strong start, the quality is chipped away throughout, as over-used techniques are used increasingly and weary narrative choices are made. The stylistic opening titles, which so carefully and beautifully presented a theme for the film in a symbolic way, later get traded for little thought about what was being shown on screen, and what it meant for the characters and to the audience. It would have been so much more refreshing to see more examples of creative and original tension builders, such as the passing car headlights, creating a beating shadow as the teens approach the haunting spirit’s old home for the first time on screen.

For every moment of subtle foreboding and clever homage (see the soup scare reminiscent of Drag Me To Hell), there’s a cliche ‘it was only a dream’ sequence or a foreign woman who of course is the one that must have all the knowledge of the supernatural. It’s one step forward and two steps back. The strong beginning provided a somewhat misleading sense of security, meanwhile one falls slowly down a hole of basic horror tropes, but at a pace that the culmination of which doesn’t hit until the substantially dissatisfying conclusion. It seems to be yet another attempt at an original idea plagued with fear of the risk, relying on stale jump scares and extreme suspension in belief to navigate around plot holes. A grand shame when there is a flicker of hope, even if it’s only for the first 10 minutes.