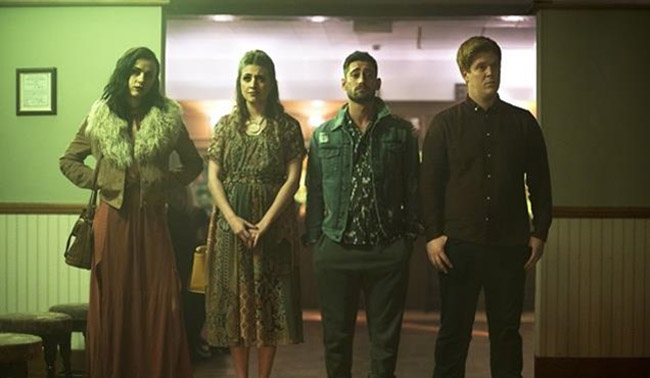 Benjamin Barfoot’s directorial debut, Double Date went down a storm at this year’s Horror Channel Frightfest, boasting bloodthirsty gore, lots of fun and frivolity, the sacrifice of a virgin and a shockingly frightening female experience that would put any man off dating for life.

Alex (Michael Socha) and Jim (Danny Morgan) are polar opposites of each other, Whilst Alex is the good-looking, cock-sure lad, Jim is just a little more reserved and has no idea how to speak to girls – that’s probably why with his 30th birthday on the horizon, Alex being the loyal friend that he is, wants to take him out for a pucker night out with the one sole mission of making sure his best mate finally loses his virginity.

When the best friends meet up with sister’s Kitty (Kelly Wenham) and Lulu (Georgia Groome), they finally think Jim’s luck is in but little do they know the twisted sisters are serial killer’s with a purpose, while Jim becomes acquainted with Lulu, the quieter sister with a conscious, the unlikable Alex has less of an easy ride with the unhinged Kitty after she cruelly rebuttals his advances.

The relationship between Alex and Jim is cleverly written, bouncing off each other with a convincing ease peppered with the funniest moments. To help loosen his friend up, Alex spikes Jim’s drink – and that of the girl’s too in the hope it will get them into bed quicker – whilst the girl’s don’t drink alcohol, Jim knocks his back only to lead to an awkwardly hilarious scene when Jim has to leave the party with Lulu to attend a small birthday gathering with his God-fearing family where he is so off his face, he has a rave for one in the middle of their living room.

The real action and bloodlust kicks in, in the last third, finally back at the girls sprawling house, whilst Lulu and Jim are bonding, Alex and Kitty have gone to get it on, and that is until she tries to kill him. Vulnerable, in his pants Alex finds himself having to fight back in an exhaustingly brutal fight to the almost death of a woman who just won’t die. The sequence is met with flawless psychotic precision by Wenham, taking on the relentless passion of a truly deranged human being; it’s hard to not question at this point whether this woman is truly human.

Splattered with cameos from Big Narstie, Tom Sturridge, Dougie Poynter, Cressida Bonas and Dexter Fletcher, who plays Alex’s Dad in a sweet and tender scene revealing Michael Socha’s ass of a character does, in fact, having a likeable layer somewhere deep down. Danny Morgan isn’t just the starring virgin, the film is also Morgan’s first screenplay venture; it’s a cracking first effort into the horror genre, filling it out with feverishly funny banter and a loyal cast. Morgan and Barfoot’s Double Date is completely batshit crazy but creepily entertaining.

Double Date is out in cinemas October 13th.