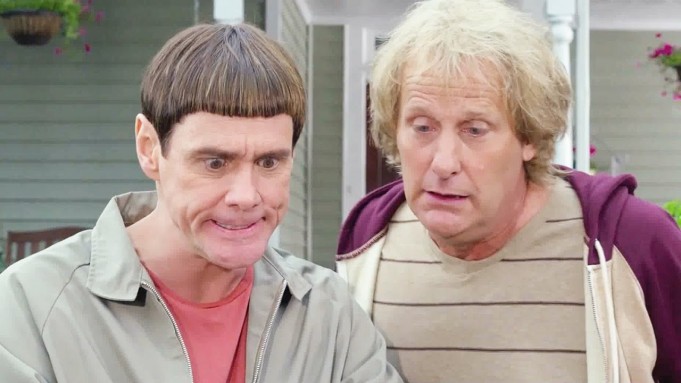 It’s been nearly 10 years since the last instalment of the Dumb and Dumber franchise, was the wait long enough for us all to be as excited as we all were for the sequel to Anchor man? Most importantly could they deliver a highly entertaining and hilarious film to make up for the lack of any stimulating story they have failed to deliver with the earlier films? I’ve got a one word answer for you all….NO!

Harry (Jeff Daniels) and Lloyd (Jim Carrey) are back and looking really old, a lot older than what they really should be. Opening scene starts with Harry visiting Lloyd in a mental institute, Lloyd in a wheelchair for the past 20 years looking like he needs a good shave, has finally been rumbled by Harry for faking the whole affair. Enter the endless mind numbing, childish gags.

The rest of the storyline goes a little like this; Harry convinces everyone he is in need of a kidney transplant, along the way he uncovers the fact he has fathered a child 20 years earlier who was put up for adoption. Lloyd, in the hope that this very beautiful, now 20 year old, woman could give his best friend that much needed kidney (and hopefully get down and dirty with him at the same time) convinces Harry to cross the country in an attempt to find her. Of course nothing goes quite as smoothly for these dim witted idiots throughout but they always manage to scrap through oblivious.

The storyline is tired, apart from a few different routes along the way; this is basically the same film as all the previous adventures of this idiotic twosome. The gags are bad, so so bad, some of them just didn’t make sense and where extremely, poorly delivered, comic timing should always be key in these types of films but I’m afraid the timing was way off the scale of bad. This was even more in evidence when the tumble weed slowly crossed the cinema in the preview screening.

The Farrelly Brothers really do not seem to have put much thinking into the making of this film and it would appear the time elapsed from the last one to this really has done it no favours. At this point I can’t even say the actors made this film even a tiny bit tolerable as they were just as awful and has only enforced my view of disdain for Jim Carrey even more.

I’ve struggled to find a positive about this film and I’ve finally found one, the minute the closing credits crept onto the screen, maybe they should have put those up about 5 minutes into the film, would have saved everyone a whole lot of money and time and gave us poor critics who had to sit through this lazy and uninspired offensive drivel, a much needed break.