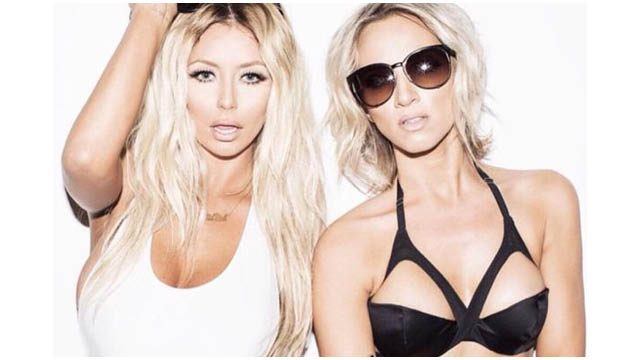 Recently here at Flavourmag we told you how the two hottest ex Danity Kane members, Aubrey O’Day and Shannon Bex, had joint forces to create the brand new electro pop duo, Dumblonde. We also gave you the UK pre-oder link to their self titled debut album and showcased their debut visual for their track “White Lightning”.

Since then the girls have dropped their second visual for the first track that they ever wrote together as Dumblonde, “Dreamsicle”. With huge hype forming around this incredible talent we thought it was only fair that the girls spoke for themselves. Dumblonde talk EXCLUSIVELY to their UK fans!

I’m not going to waste any time here so I’m just gonna jump straight in. Where did the name Dumblonde come from and what’s the meaning behind it?
Shannon: Aubrey came up with the name, and it stuck instantly. We loved it because it mocked one of the many stereotypes that we’ve faced being in a girl group that had fixed roles in the industry. It’s not about the actual blonde hair colour, it’s about fearlessly acknowledging and outshining stereotypes.

You girls have been working on Dumblonde’s sound for around a year now, how did this unique sound come about? With a history of RnB/Pop and Country this wasn’t the sound that most people expected from you. Why did it feel so right for you guys?
Aubrey:  When we made this album our only goal was to remain as experimental and shut off to the industry noise as possible. R8dio, our producer and son of George Johnson from R&B funk group The Brothers Johnson, really crafted our sound. Him along with Candice Pillay (writer of Rihanna’s American Oxygen) constantly pushed us to think beyond our musical past and embrace methods of singing, writing and sound production in the ways most foreign to us. Dem Jointz also came on during the project and collaborated and created a few songs on the album as well. We made the music that was most cohesive and authentic to the valued sounds, and lyrics that Shan and I have in common.

The Dumblonde sound has been created solely by you two and your small team. You have both stated how important it was for you to create this body of work independently. Why was this so important you?
Aubrey: We wanted to make sure that if we dedicated our lives in the necessary ways for success in the music industry, by keeping it away from our personal endeavours and family, that we would remain in control of every inch of the released product this time. We feel an artist doesn’t truly make their mark on the industry until they have grown to the stage of absolute creation and has a hand in every element of their project and business. We finally have three albums together and one separately, we reached this goal of doing this in a group. Which is much harder than individually. You girls have co-wrote everything on the album. With your previous writing experiences falling into completely different music genres, what challenges did you come up against when creating this project lyrically?
Aubrey: This project was actually the easiest to conceptualise out of everything we’ve been a part of in our past. Candice Pillay is so outside of the box and refreshingly authentic. It was our pleasure to work with her and allow her to take us out of the norms we have grown accustomed to and reach for comfort in areas that once felt out of reach.

Originally the music was going to be released in the form of an EP, but after signing a distribution deal with Universal you guys threw a spin on things and turn’t it into a full album. What changed your minds?
Shannon: Once signing with Caroline/Universal, they felt that our music was too strong to get behind as just an EP. They were stern about pushing ourselves into a full album and felt that they could utilise their team most effectively in pushing out a full length body of work. So we said, “Ok, cool. ;).”

We understand that the visuals are just important to you as the sound. You have stated previously that each visual is different and each visual tells the story for that individual track. Why are visuals so important now-a-days in music?
Shannon: With a new group that was formed in the demise of a very successful past group, we felt it was important to show as much diversity and exploration in the product, branding, style and creative approach as possible. We have been sitting on endless ideas for years to achieve a group setting but without the group stability to push those visions to light, so once all of the emotional drains weren’t present we ran with our creative, and are still going to this day. You have 6 visuals already recorded. Do you have any more planned for the future? If so, what can we expect from them?
Shannon: Yes. We are constantly creating and using different techniques and styles to bring a new piece of our Dumblonde brand together through each video.

You have just brought your track Dreamsicle to life with its colourful arty pop visual. This was the first song that you girls ever wrote and recorded as Dumblonde. Whats the story behind the track?
Aubrey: R8dio crafted the start of our sound with “Dreamsicle”. We loved the message it sends in regards to never letting the dream die and we create the visual based off of the way the sound made us feel.

Talking about bringing the music to life…having experienced the Danity Kane era it’s clear to see that both you girls love the stage. What does Dumblonde’s live shows have in store?
Aubrey: We are combining our two favourite elements of stage shows. Live band with syncopated choreographic. We loved working with Miguel Zarate on this project and making the energy and feel of Dumblonde come to life. We worked on many different stage shows prior to locking into what we have finally agreed on. Some were overdone, and some weren’t done enough. We wanted to find a unique balance of what has made us great in the past blended into what will transcend our sound and branding in this new era. It’s fun. A lot of fun. Everything you loved from the past and needed in the future from us is in our current show. Our first show is at The Roxy, August 11th so we hope everyone comes out to get the first look!

Will you be bringing your music to the stage in the UK? If so, when?
Aubrey: Yes the music is currently available now. We love the UK and hope to be out there touring very soon!

You have a huge fan base here in the UK with many having followed you from the start of your careers, way back on MTV’s “Making The Band”. We hear you may have a reality show in the pipeline. Can you tell us more about this?
Aubrey: Yes, I am filming a show right now that will loosely follow the ins and outs of the Dumblonde movement and I can’t wait to get be back on TV screens with this real music endeavour.

Even though the album is now done and ready for its international release in September, are you girls continuing to create extra magic in the studio throughout your journey?
Shannon: Yes, we never stop recording. We have locked into such an effortless dream team experience for the first time in our careers with R8dio, Candice Pillay and Dem Jointz, so we love to create again and continuously we will do so!

What would you like 2015 to have in store for Dumblonde?
Aubrey: Happiness is all we have ever wanted. To be able to do what we love and enjoy every minute of it!

If you could change one thing in the music business for the better, what would it be and why?
Aubrey: I would change reliance of comparison to publicise art to be eliminated. Comparison is the death of creation and authentic art, and until we stop forcing artists to work against each other in the public eye we will never know the depths and endless possibility the world of art can birth.

Can you give us a Dumblonde Flavourmag EXCLUSIVE?
Aubrey: Our “Tender Green life” video comes out on August 21st and it is our favourite video and song to date!  It is completely left and 100% experimental. It was the first video that we didn’t co direct on and that we did ourselves, we are really excited about how unique and defining it is.

“We started out this project knowing that visually we wanted to create a different story behind each song. Each video being a different stylistic format that when combined, create the full picture of the many facets that create ‘Dumblonde’.” – Aubrey O’Day

“We loved poking fun and challenging the “dumb blonde” stereotype that is constantly portrayed throughout history with this video.” – Shannon Bex

So there you have it. Everything that you need to know about Dumblonde in their own words. Make sure you keep your eyes peeled for all the brand new visuals coming from the duo every fortnight until the full album release. In the meantime pre order the album here – https://itun.es/gb/CWp88 and get the five instant downloadable tracks, including “White Lightning”, “Dreamsicle” and “Tender Green”. Here at Flavourmag HQ we have them all on constant repeat!