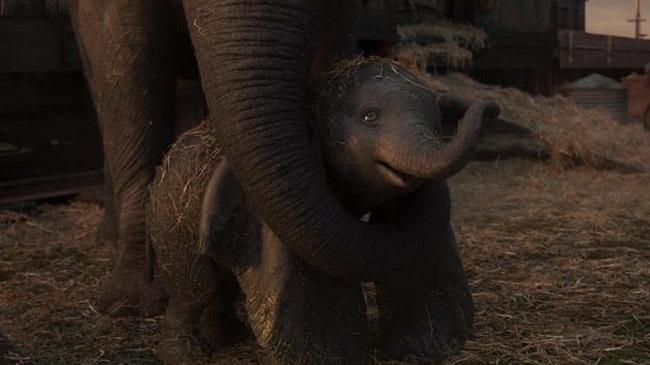 Bringing it up to date for today’s audiences has left this feeling flat; the magic has left the circus.

If it isn’t broke, don’t fix it! These wise words couldn’t have been any truer for Tim Burton’s live-action reboot of the 1941 Disney classic. The latest in a trend of classic remakes leaves it’s heart at the door in favour for sparkle and spectacle but it guarantee’s one thing, the CGI elephant is still just as adorable as the original.

In a convoluted fashion, the story revolves mainly around the children of the widowed trainer turned war hero Holt Farrier (Colin Farrell), having lost their own mother and a lack of connection with their father they take to looking after the newborn elephant with extremely large ears, Dumbo. There are a few moments which try to recreate that of the original if there was any scene that would guarantee a tear or two would be that of Dumbo being prized away from his mother after she tries to defend him from the human bullies. In its place, we are left with rather a rushed over sequence to make room for more of a human element whilst still trying to send the right animal rights message.

Burton stretch’s out the story an hour longer than the original, opening the floodgates for a poorly thought out plot which instantly forgets that the animals are supposed to be the centre of this story. Gone is the heartfelt connection between Dumbo and the mouse as his best friend and replaced with bad human’s verses good. Michael Keaton steps up in the bad guy role as VA Vandervere seeing his opportunity to make big bucks by double-crossing the independent circus owner and imprisoning the circus troupe all in order to manipulate Dumbo for his own theme park-sized circus which lacks soul.

With a cast that include Farrell – who I am convinced had a bad CGI job done to his face to make him look younger in the opening scenes -, Danny Devito as the ‘good’ circus owner and Eva Green as the flying trapeze artist who is expected to fly on the back of Dumbo whilst being the unspoken love interest you would have expected more. The result shows that they simply could have phoned their parts in. It almost felt like an attempt was made to write decent character specs but interest was lost and their stories were unfinished.

Despite all the negatives and emptiness spiralling into the vortex of the big tent, the picture is by far Burton’s best in a few years but bringing it up to date for today’s audiences has left this feeling flat; the magic has left the circus.

Dumbo is out in cinemas March 29th.