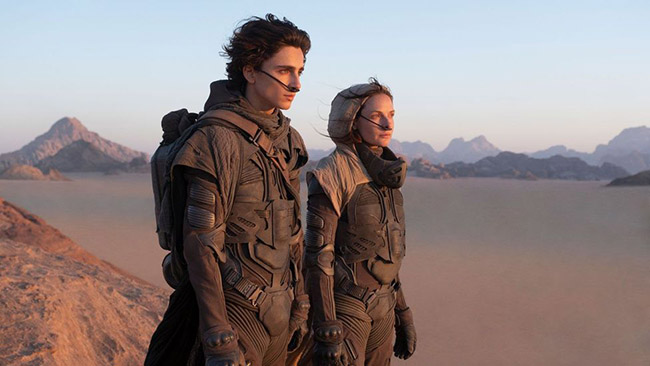 Let’s all face it, if you didn’t know Denis Villeneuve’s version of Dune was about to be released, you must have been living under a rock.

The over-hyped reboot of David Lynch’s 1984 catastrophe gathers the stars of today to revive the desert story. Thanks to the use of modern technology and cinematographer Greig Fraser’s eye for the spectacular views you get an ambitiously stunning piece but for all that comes in between leaves the taste of a bland wet fish.

The adaptation of Frank Herbert’s classic sci-fi novel sees Timothée Chalamet play Paul Atreides, the son of a powerful duke (Oscar Isaac) and Rebecca Ferguson’s Lady Jessica, a member of the Bene Gesserit group. Set on the planet of Arrakis, Paul struggles with the powers he has been blessed with from his mother. With the House of Atreides taken over the governing of the sand dune covered planet that is not only rich in the life-giving and fuel for travelling at the speed of light, spice, it’s also swarming with sandworms and the hostility of the Fremen – the native people of the planet.

Enter the bad guy, Stellan Skarsgård’s Baron Vladimir, a blob of a being that refuses to give up the very lucrative Spice trade to the Atreides, hence the battle commences. Not only does Paul have a battle for his life on his hands but the constant visions of his future love, Zendaya’s Chani, has him shaken to the core.

For all its epic blockbuster dominance with an A-list cast of champions and the crème de la crème of filmmakers at the helm, nothing can snap it away from the fact this is almost a carbon copy of Lynch’s adaptation. It’s nothing but a stretched out, slow-paced, sweepingly stunning venture that induces a dire yawning effect on one’s soul. That writing should really be blatantly on the wall, if Lynch’s version can cover the whole story over approx 3 hours in his director’s cut – it tells you a lot about how much emptiness awaits in Villeneuve’s 2 and a half hour PART 1 of the story. Oh yes, that’s right, this only covers half of the full story.

Lacking in an immense amount of detail and the motivations of peoples actions such as an inkling of Lady Jessica’s past, Villeneuve has really missed a trick in building something of substance rather than languishing on the epic journeys of sandworms and aerial shots of the remote desert.

With a cast that includes Chalamet, Isaac, Ferguson, Javier Bardem, Charlotte Rampling, Dave Batista, Jason Momoa and so many more, there is no shortage of a great performance on every level of futuristic optimism. Zendaya only hardly gets a mention, for all the publicity she only appears for the shortest amount of time towards the end of the film.

Like with any endless desert, there’s an illusion, a mirage flickering in the distance of what you truly desire the most, but in reality, Villeneuve’s passion project is lacking any emotional connection, depth or sense of any meaningful urgency.