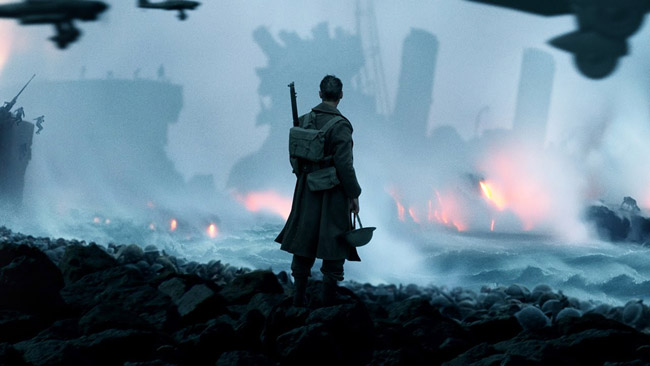 The hype is real for Christopher Nolan’s much anticipated Dunkirk, it’s a spectacular and very British film of epic proportions, of thundering dread that rains down like an apocalyptic bomb with its relentless bombardment of emotive fear and the realisation of the horrors our grandfathers and great grandfathers went through just to survive.

Nolan’s Dunkirk is a far cry from anything we have previously witnessed from the Interstellar and the Dark Knight Trilogy director and most certainly his best work to date; his narrative is sparring and the visuals mesmerizingly beautiful in a powerfully immersive survival story that rips at the very heart of the living soul.

Told from three different viewpoints titled Land, Sea and Air, and timelines which are seamlessly woven together lapping each scene at crucial points, the unyielding action starts from the very beginning with a young squaddie, Tommy (Fionn Whitehead) scrambling through the streets of Dunkirk, dodging a hail of bullets before reaching the beaches were scores of British and French soldiers have taken refuge in a hope to be ferried home after the German’s have seized control. Having befriended a lone soldier Gibson (Aneurin Barnard) the pair persistently embarks on any conceivable idea just to make it off the doomed beaches to make it home safely but constantly get beaten back with one crushing blow after another. As you would fully expect, it’s a bleak setting with a lack of ships to fetch the men home and a lack of air cover to fight off the looming atrocities waiting for them from the skies.

Tom Hardy as Farrier, whose face is covered for most of his part, leads the British fight from the thin on the ground attack from the skies, a precision fighter pilot who takes his own life in his hands for his fellow men as his fuel gauge takes its own leave from the battle. From the sea, Mark Rylance as Mr Dawson and his sons set sail on their tiny cruiser to join the fleet of civilians making their way across the see to bring home our boys but after rescuing a traumatised officer in the form of Cillian Murphy suffers his own personal tragedy which he fights through with the great British stiff upper lip.

Nolan’s visceral blockbuster is enhanced by Hans Zimmer rolling and thunderous score, with each tragic moment and the explosion of bombs giving the beaches of Dunkirk a battering Zimmer’s score amplifies the intensity to a goose bump inducing crescendo which fails to dissipate in the whole 1 hour and 46 minutes of gloriously gripping action. It’s also enhanced by the lack of dialogue, not to say there isn’t any, but just enough of a natural chatter, the action and standout performances speak loud enough to give its audience all it needs to understand the horror that these men endured.

Christopher Nolan’s retelling of this tragically fateful period of history is more a piece of honourable acknowledgement to those men who lost their lives fighting for their country through no choice of their own, This certainly isn’t a platform for one actor to shine, it’s an ensemble cast of exceptional talent, and for someone who wasn’t rooting for One Directions Harry Styles to do a great job ate a whole lot of humble pie after his portrayal.

A humbling, distinctive and pure cinematic indulgence of raw cinema at its glorious best, Nolan is justified in his adamance that this film shot with IMAX cameras, needs to be seen on the largest IMAX screen possible to get the full immersive power of this beauty, breathtakingly heart stopping masterpiece.