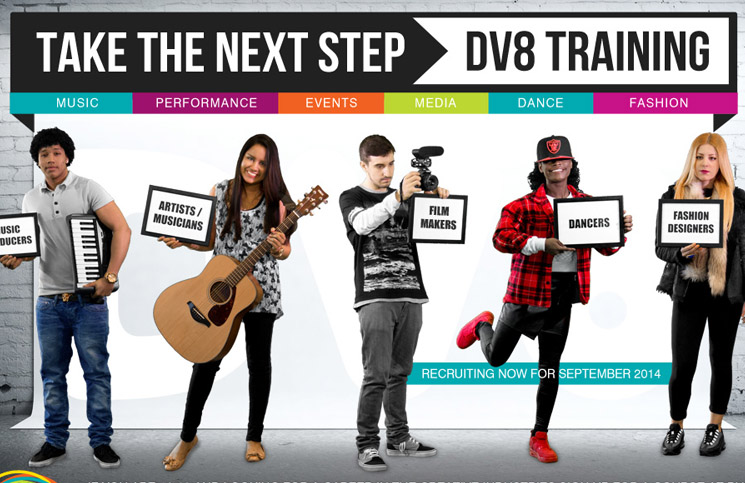 Visit us at the DV8 Music and Media Centre to find out about all of the courses available at Dv8 & Soundskool and ask our industry professional tutors how to:

Hear first-hand about DV8 course options, qualifications and apprenticeship opportunities. Talk to current and former Dv8 students, quiz each other about what happened in the other workshops and take part in a Q&A with our special guest – Ben Bailey Smith aka ‘Doc Brown’

Currently the new co-star of ITV1′s Law & Order, Doc Brown has a career that most artists could only dream of. Doc has taken on various roles in front and behind the camera in both Film and Television. He has rapped on stage with the likes of Mark Ronson, Lily Allen and Amy Winehouse.

Acted in roles in the BBC series “Rev” and “Miranda”, as well as Channel 4’s ”The Inbetweeners”. Smith also provided voices for the characters on the CBBC series “Big Babies” for which he also sang the theme tune. If that isn’t enough, Doc created a teen comedy-drama for the BBC called “The Four O’clock Club”, on which he is also the co writer, and co-musical director!

Join in workshops and get creative with industry guests from MTV, Sony Music, Industry In The Streets and Small Green Shoots.

Each workshop will give you the chance to find out what its like to study at Dv8, exactly what the industry expects and how to access careers after your studies. This is also your chance to showcase your skills to people in the business.

Please arrive at 4.30pm at the below address:

Please note, there are limited places on Dv8 open days and you must register in advance if you would like to attend.