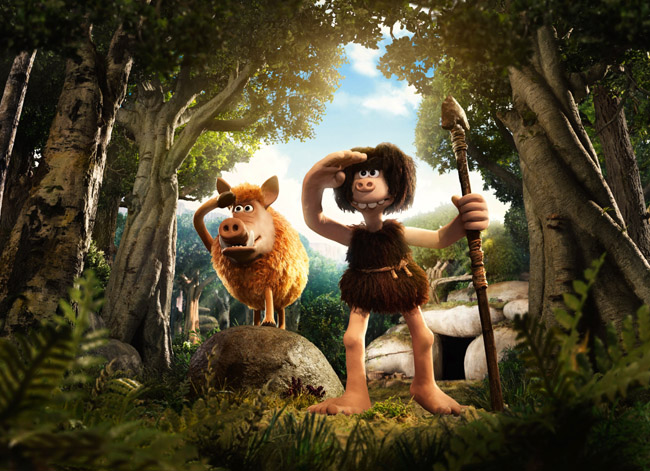 Wallace and Gromit creators, Aardman and stalwart Nick Park come together yet again for a new claymation adventure with Early Man. This time the stop-motion geniuses take us on a historical tour to the Stoneage. Where our basic ancestors lacked the brain capacity of a pea but are still pitted against the European Bronze age creators in a battle of the beautiful game, Football.

Jumping firmly on the 2018 World Cup bandwagon, Aardman has cleverly timed their latest outings release to coincide with the excitement of worldwide audiences. Conveying a story that dates back to the birth of Football firmly at the door of our Caveman brothers and sisters. ‘Somewhere near Manchester’ after an asteroid hit the earth wiping out all dinosaurs, our ancestors constituted the game purely by accident. Over the years, the game has almost been forgotten. A lone tribe are left wondering the British wasteland, as the Bronze Age bulldozes its way in threatening their hunting homeland. Nevertheless, there is one solution to save their home, a game of Football with the skilful Bronze Age professionals. The only snag, this ragtag tribe have no idea how to play.

The tribe consisting of a diverse bunch that have cotton wool for brains are made up of a cast of Timothy Spall as the elder of the tribe, Chief Bobnar, Selina Griffiths, Johnny Vegas, Gina Yashere and Richard Ayoade with Eddie Redmayne voicing the young and curious Dug. Dug and his faithful sidekick Pig (Nick Park) — who is more intelligent than the whole tribe — leads the charge with his curiosity for what lies behind the walls of the new Bronze Age Village. A Bronze Age that lays claim to the invention of sliced bread, wheels and machines.

The Bronze Ager’s are another diverse bunch with various European accents which in some ways is historically correct as the Bronze Age introduced people from Continental Europe to Britain. They have many similarities to the Roman’s, especially with their arrogant leader Lord Nooth (voiced by Tom Hiddleston) from his costume to the Gladiator type arena in which they hold their Football matches. Dug comes to a deal with Lord Nooth to try and save their home, If Dug and his tribe can beat their team they can have their home back. Maisie Williams as Goona comes to the aid of the two left feet tribe, with the professional team being a men-only group and her desire to play Football her only option is to turn her back on her people and kick the tribe’s backsides into shape.

With undertones in head nods to Brexit, Aardman’s charm and back to basic aesthetic run deep and it’s refreshing not to get bombarded by overblown CGI filling every frame that is constantly force feed to young audiences from so many animation pictures. But Early Man is Aardman’s weakest link from a catalogue that includes Wallace and Gromit, Chicken Run and Shaun the Sheep. The storyline is weak and flimsy, bumbling along with a lack of excitement or a thoroughly engaging warming connection. Even its light-hearted humour frequently falls on deaf ears giving an air of a rush job to get this completed, Bland runs through its defence and lands a spectacular free kick.