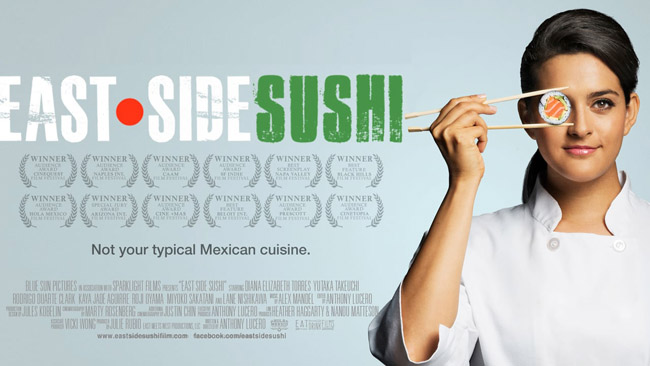 Freshness counts for everything when it comes to sushi.  And, even if you’re not keen on the cuisine, it’s hard to dislike digital release East Side Sushi.

According to the opening captions of East Side Sushi, “A good sushi chef can pick up his knives and go anywhere, like a samurai warrior.”  The words are taken from Sushi, the first book written in English on this most intricate of cuisines.  Rather like Julia Childs with chopsticks and sake.

You’ll have noticed it’s assumed the chef is male and that’s one of the obstacles Juana (Diana Elizabeth Torres) has to face when she sets her heart on being a sushi chef.  A Latino single mother who’s been working on the family fruit cart for years, she throws in the towel when she’s mugged at gunpoint and robbed of the day’s takings.  She looks for another job so she can put her little girl through school, and is taken on in the kitchen at a local sushi restaurant.  One of the chefs, Aki (Yukata Takeuchi) spots her talent and knife skills, but her ambition to be a chef is scuppered by the traditionally-minded restaurant owner.  So she decides to enter a TV competition instead.

Originally released in the USA in 2014 and now available digitally, this modest, eminently likeable little film is perfect for watching at home, with a bottle or two of beer and a takeaway or any other food that will conjure up the omnipresent Californian sunshine.  Its story is straightforward, there’s little in the way of a sub-plot, but its themes are still topical – co-existing cultures and the people who work behind the scenes and rarely get the credit, while the front men always look good.

Served up with simplicity and charm, the film also offers a large helping of fresh flavours – an unknown cast with Diana Elizabeth Torres giving a spirited performance as the determined Juana, her developing friendship with Aki which never shows a hint of romance and is all the more refreshing for it, and the food.  Ah, the food!  Whether you like sushi or not, you can’t fail to be fascinated by the precision and artistry that goes into its preparation, its vibrant colours and the elegance of its presentation.  This is not a film to be watched on an empty stomach.

If the film has a weakness, it’s the TV competition that attracts Juana’s attention.  Far too much time is wasted on the programme, shown to us as if we were watching it live and continuously thinking how low the production values are. It could quite happily have been chopped – at speed, preferably, using Juana’s exemplary knife skills – and the mandatory 90 minutes would still have been filled up quite happily.

But it’s difficult to resist such down to earth charm presented with a freshness and lack of sentiment.  With just a digital release in the UK, it would be all too easy for East Side Sushi to slip under the radar.  It deserves more.  Just go easy on the wasabi.

East Side Sushi is available on digital from Monday, 23 January.