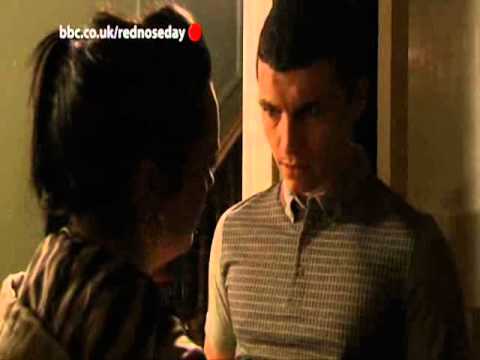 Poor Whitney. Only 18 years old and she has been a victim of abuse in more than one case. The episodes showing Whitney’s trauma hit home for many viewers and action help lines say they received thousands of calls after the soap was aired. Whitney (played by Shona McGarty) was groomed and abused by her step dad to be Tony in 2008, which left viewers disgusted and on their edge of their seats, willing Whitney to escape the situation. Luckily, vile Tony was arrested and disappeared from the fictional Albert Square forever.

Just as Whitney began to recover from the emotional trauma, she met cheeky chap Billie and soon fell in love. After Billie tragically passed away from alcohol poisoning, Whitney was left distraught. One thing led to another and Whitney ended up living with Janine, who manipulates her into prostitution for her own financial benefit.

As Whitney hits rock bottom, she attempts to pickpocket a passing strangers bag and consequently gets hit in the face. ‘Luckily’ for her, a charming young man called Rob (played by Jody Grantham) sees the incident and offers her food and a place to stay, should she ever need it.

Eastenders producers say they researched the abusive storyline thoroughly before filming the traumatic scenes. They worked with charity Comic Relief, who said that sexual predators tend to look for vulnerable women who are homeless or without family or friends for support. Whitney was made to feel safe by Rob and asked if she could go away with him. She left town with him without telling anyone of her whereabouts.

As friends and family become increasingly worried about her, they managed to track her down and best mate Lauren was horrified to discover that Whitney was sleeping with Rob’s friends to ‘pay off his debts.’

Gilly Green, Head of UK Grants at Comic Relief, said: “It is vital that we continue to alert young people to the dangers if we are to stop them being exploited and the opportunity to work with EastEnders will make a huge audience aware of this issue. We have been working with the EastEnders script writers and some of the young women from projects we support to ensure the story reflects the reality of young people caught up in sexual exploitation.”

Whitney eventually realises the danger of her situation and is faced with the terrifying fact that it is not love she experiencing, but pure exploitation. As she tries to escape, Rob says “you will make my friends happy, or you will get hurt.” Terrified, she escapes out of a first storey window.

Whitney has been looking over her shoulder ever since she escaped the evil pimp and things were finally starting to look up for the teenager. This week, Whitney goes to meet her new love interest Lee but is horrified to discover Rob in his place – she soon realises she has been set up.

Terrified, she flees and jumps into the car that Fatboy is driving to SouthEnd. However, she is unaware that Rob is right on her trail…

Confronting her at her seaside hotel room, Whitney fears that she will never escape Rob when he viciously attacks Fatboy, leaving her alone with him. Fatboy manages to call Ryan and he hurries to his sister’s rescue. Later, Whitney witnesses a fight between the two men which ends in them both crashing into the sea from the pier edge. As Ryan (played by Neil McDermott) is due to leave Eastenders this year, it seems obvious that he will not survive the fight. The question is, how will Whitney cope? And will she ever be rid of evil Rob?

The storyline has received hundreds of complaints from viewers and the debate has now begun – has Eastenders crossed the line?

My answer to this is no, they haven’t. Exploitation of women, who are sometimes still only children, goes on every day and many people are still ignorant to it. It is obvious that it is still an uncomfortable subject to discuss openly, as thousands of people called the BBC helpline asking for confidential advice after the show was aired.

Actress Shona McGarty spoke to the Sunday Mirror about her role and meeting victims of abuse: “They all came down to the studio and we just sat together and talked for hours. It’s absolutely shocking that this actually happens to girls of such a young age. The youngest one I met was only 13. It stunned me how easy it was for these young girls to be manipulated.”

She emotionally added: “What shocked me was how lovely and normal these girls were. They could have been the kind of girls I hang around with. I knew it would be upsetting to meet these girls, but I needed to fully understand what they’d gone through. It’s such an important subject and not enough parents with young daughters and even sons know about it.” The young actress said she was honoured to play such an important storyline and she wants it to be as realistic as possible: “This is going to be a continuing storyline – it’s not just going to be brushed under the carpet. Whitney will live in fear that Rob and his gang are going to come after her when she escapes. That’s what these people do. They don’t just leave you to get on with your life. In their mind they own you.”

The NSPCC’s director of communications John Grounds approved of the storyline, saying it was “helping to raise awareness of the hidden nature of sexual abuse,” adding that exposure of the subject is “vital in persuading people to take action to stop it and encouraging children to speak out.”

If you know someone in a similar situation, or if you just need some advice, please see the below help lines that can offer advice and help.

National Society for Prevention of Cruelty to Children – 0808 800 5000 – The NSPCC Helpline provides advice and support to adults who are concerned about the safety or welfare of a child.

The Samaritans – 08457 90 90 90 – The Samaritans provide someone to talk to no matter what situation you are in. Conversations remain private and the helpline is open 24/7.