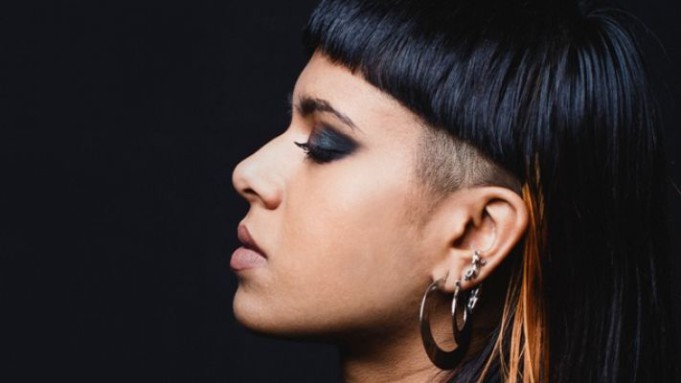 Sri Lankan by heritage but brought up mainly in Australia, Ecca Vandal creates the type of excitement you get once in a while when you hear a fresh artist. The last time that happened-well that had to be the cerebral FKA Twigs.

In some respects there are parallels between Twigs and Ecca Vandal-they both explore the visual world with the relish of a person who has only just discovered the power of the visual art. Parallels however stop there. While FKA Twigs likes to slowly immerse you in her toxic vibes Ecca Vandal positively drowns you in a sound that fuses genres to create a sound that takes you close to a blood vessel bursting stroke.

Having signed to Island Records she can already lay claim to supporting Young Fathers and the legendary Prodigy.

Flavour of course had to get some time with the fresh Ecca.

So for those that do not know explain the genesis of Ecca Vandal.

I was born in SA and lived there for a few years. Musically I was surrounded by traditional SA gospel music and then when we moved to Australia I grew up on my sister’s cd collection; Biggie, Whitney and then when I went to school in a white suburb so I was surrounded by a lot of punk rock and grime. I actually studied jazz for three years and studied improvised jazz, free jazz and so when I left jazz school I realised my aspiration was to write my own music.

Your sound is a heady mix of genres like punk, rock and hip-hop.

I guess there are elements of genres like punk rock, hip-hop- I am a huge hip-hop lover, elements of electronica and some people tell me they can hear South Indian influences which is of course part of my heritage being from Sri Lanka. I have even heard people say they can hear traditional South African beats and so somewhere along the line I seemed to have soaked up these elements unconsciously.

You must be happy that you cannot be neatly positioned in one particular genre.

I don’t really care. I know some people like that but I am not a label persons. I love so many different styles of music andso these styles have made their way into my music. I think that in terms of genres it is really just a blurred line anyway.

I read somewhere you spoke of ‘defacing’ your sound –explain that a bit more.

When I say defacing sound I mean I don’t like to get too comfortable in a sound and be like ‘this is my sound’. It’s a reminder to myself to always push forward and keep moving things in a different direction. Island and also my label Due Process have been really supportive and they are open to my creative process and freedom-if I have not got my creative freedom them I am useless to anybody. Yes-towards the end of last year I was signed and that was cool because of course the heritage and the roster is so amazing. To be on that roster of artists was kudos enhancing. It was also great that people outside of my neighbourhood actually seemed to like my music!

Indeed people outside of your neighbourhood are liking you like –Young Fathers and Prodigy both supported by you!

Young Fathers took me on the road with them in Australia.  They were very cool, their show was amazing. I was actually going to see them anyway because I am a big fan but yes they asked me to open up for them so that was so rad.

Touring with Prodigy was incredible from lighting, to production to sound.It was their only live show in Australia and they just delivered. That was actually only my third live show so it was quite scary; one because it was only my third show but also because it was such a big deal to open up for such pioneers of their genre.

What did you learn from either of those amazing acts?

Young Fathers drew parallels to their own musical journey where they spent a long time where people were not able to box them in or categorise them and they said to me that I would probably experience that as well. I had a great conversation with Alloysious who stated that you are on a particular path with some really heavy music. So not only are you going to find some challenges because you are ‘brown’ but also because you are a girl.It is sad to say that he is actually telling the truth so I am all about finding a community who embrace music that’s on the edge.

How difficult has it been?

It has been interesting and challenge being a female in the industry but you have to sometimes just do what you want to do. Don’t get me wrong there have been people who have been super supportive but then I have been on a festival line-up and I have been the only female let alone the only brown person. That is how it is here in Australia though people who are not ‘white’ remain the minority but being female as well within the genres I seem to mix in means I am a rare breed.

Before we get onto your creative output, parallels with another female Sri Lankan artists MIA are undoubtedly going to be made-what has been her impact on you if any?

I actually met her once at  festival and this is before I released any music and she asked me if I was Tamil and when I said ‘yes’ she was like I have only ever met one other Tamil Sri Lankan doing music? So there are only three of us around. I am proud of her as a Tamil sister and I would of course love to collaborate with her but musically I think we are very different.

Love your music but your visuals are totally powerful-how involved are you on them?

I am involved in all the visuals-I am quite big on the diy approach. Initially I actually got a video director to do the video for White Flag but it did not work and so I scrapped it. So I was sitting with Kid Knot (my producer) and we discussed it and he said that the video just needs to be me and the music and so that is the video for White Flag. From that we realised we should do all our own videos.

White Flag then is a riotous bit of music.

When I put out my first single White Flag I actually recorded, mixed and mastered it myself and I put it online to see what people would think of it and see who would be drawn to it. A few weeks after I was able to form my team, get my manager and it just fell into place.

Lastly your latest single is End of Time but when can we expect that album?

The album The End Of Time album is coming out at the end of the year but I have a few small project as a kind of pre-taster that will be coming out soon but most important I just want to keep creating new music, get out there and hopefully I would like to hit the UK which I can say should be soon!.