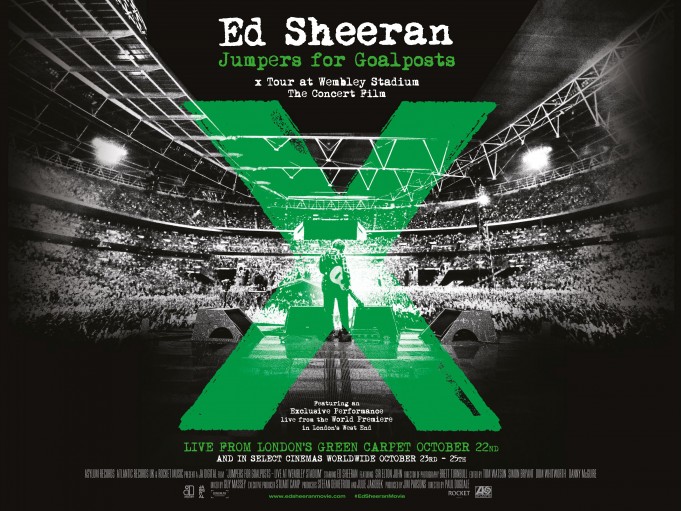 Join Ed Sheeran, currently the most successful artist in the world, live from the London world premiere of his spectacular new concert film debut, “Jumpers for Goalposts”.

This special cinema event, including red carpet highlights, an exclusive live performance from Ed and the film shown in its entirety for the first time, will be beamed via satellite live from London’s Leicester Square to thousands of cinema screens around the world on Thursday October 22nd from 6PM BST. Fans can be part of the experience at simultaneous screenings across the UK; tickets for local participating cinemas will begin to go on sale from Thurs 24th September at www.edsheeranmovie.com. Check local listings for additional film screenings across that weekend.

Jumpers for Goalposts brings together Ed’s captivating performances from the biggest shows of his career at Wembley Stadium in July 2015, where he wows the 80,000 strong crowd with his biggest hits to date, including “The A Team”, “Sing” and “Thinking Out Loud” – and there’s even a surprise duet from Sir Elton John.

As well as his breath-taking onstage performance, Jumpers for Goalposts is intercut with the story of Ed’s triumphant road to Wembley, presenting a revealing and personal glimpse into life backstage and on the road, along with an honest and intimate reflection by Ed – and those closest to him – on just how far he has come.

This special global cinema event is an invitation for Ed’s millions of fans to join him around the world and celebrate what he has achieved so far, before inevitably he moves the goalposts once again.