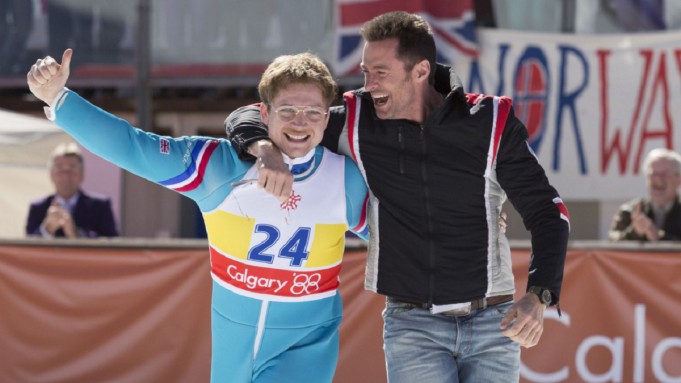 It’s no great surprise that the new film from Director Dexter Fletcher, Eddie the Eagle, just won Gold at the Sundance film festival this week. There is absolutely nothing about this movie you could hate, with a feel good factor off the charts, it’s truly inspiring. Eddie the Eagle Edwards was an unlikely hero back in the 1988 Calgary Olympics, making history in becoming the first British ski jumper to take part in the winter games in over 60 years. He may not have been a winner in the most common sense of the word but he won the hearts of the people watching his amazing display of courage, determination pure joy at just making the biggest jump of his life.

The film begins with Eddie as a child, full of hope that one day he will take part in the Olympics, participating in which sport? He hasn’t quite figured that one out yet and embarks on a process of elimination; finally after many years of trying and failing in many sports a light bulb moment goes off in his head and settles on Ski Jumping.

Eddie (Taron Egerton) faces a major hurdle in his struggle to become an Olympian and has to fight The British Olympic Committee and their totally redundant rules and despite his worthy efforts is still told he is not allowed to compete. In order to impress the committee and do everything that is needed he travels to Germany to attend a training facility to become as good as he needs to be, where he meets fallen US champion Bronson Peary (Hugh Jackman) who reluctantly becomes his coach because he simply doesn’t want to see the poor kid kill himself! (This part of the story didn’t actually happen in real life; Eddie was actually trained by two American Coaches in the US). We watch as Eddie stumbles, tumbles and almost kills himself to become Olympic worthy and against all odds and due to a recorded mark he thought wasn’t recorded finally achieves his dream to the disbelief to those around him. Egerton’s Eddie is totally endearing, you can’t help but laugh at him, cry with him and back him 100%.

The chemistry between Egerton and Jackman is perfect and this comes across hilariously on screen, both works seamlessly together and do not seem to try too hard to convince the audience this actually went down in real life. Their performances seem to be underplayed and effortless which actually makes them both stand out, grade A performances. North London Director Dexter Fletcher, who is known for his work on Wild Bill, Sunshine on Leith and many acting credits that include Lock Stock and Two Smoking Barrels, has struck Gold with this story and nailed his direction to the wall, he deserves a standing ovation for his work on this film. The score is perfectly placed and transports its audience straight back to the 80’s for that little trip down nostalgia lane.

Eddie The Eagle is out in UK Cinema March 28th