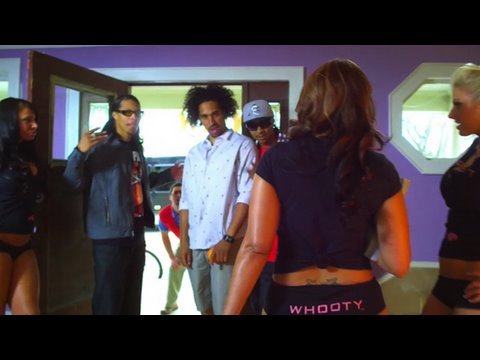 EDUBB is a rap group consisting of Nem, Almighty ‘Dolla’, and Johnny Boi all hailing from Atlanta Georgia. We chat to the fellas to find out what ‘Whooty’ means and to get a little inside info on ATL’s Hip Hop trio. How did you come up with the name EDUBB and what does it stand for?

Nem: EDUBB is slang terminology that represents our hometown area of Atlanta. ‘Dubb’ is slang for ‘20’ and ‘E’ standing for EAST. Highway 20 east represents the ‘eastside’ of Atlanta where we grew up. The name was actually given to us at one of our early shows.

What inspired you to get into the Hip Hop music scene?

Dolla: Nem is kin to Royal C from the Hard Boys is a part of one of the 1st gangster rap groups that sold a gold record in Atlanta, GA. We grew up watching them freestyle in cyphers and write rhymes; eventually we tried our own freestyle circles and started kicking rhymes emulating what we observed. Included in this circle was Kaine from the Ying Yang Twins, before they hit it big. Basically we grew up rapping  and became heavily involved at a very young age.

What are your individual musical influences?

Do you think Hip hop is dead?

Dolla: I think Hip Hop is awesome right now; it is transcending right now, and crossing different musical boundaries.  New Artists like Kid Cudi and Wiz Khalifa are doing some cool things. One thing about Hip Hop is that it is always changing and evolving, that makes it fresh!

Nem: Hip Hop never stays the same; you can’t call it one thing.  Once one trend or sound passes, another one comes up.

Johnny Boi: One thing I don’t agree with in Hip Hop is what is “promoted”.  What is played on the radio, the certain songs that are ONLY made popular because of monopolisation of the music industry and politics.

What inspired you guys to come up with the word and song ‘Whooty’?

Dolla: We would joke around say a ‘White girl with a big booty’ is a ‘Whooty’. It all started when we did a show by Florida State University; which is a popular college party town. We call it ‘Whootyville’. I will never forget!  I met a Caucasian woman there, who literally had the measurements of 36-24-46! I’ve seen some white women that had nice booties, don’t get me wrong, but it was never something that just ‘stuck’ out to me, pun intended. In entertainment media rarely do you see curvy white women being glorified.

What are your plans for this year?

Nem: We plan on touring with Jagermeister in the states throughout the southeast region, and move out west and up north. We just recently became a Jagermeister officially sponsored band. So we have released our song and video about EDUBB’s drink of choice ‘Jager Bombs’. Shout out to Jagermeister!

If you could perform anywhere in the world, where would it be? And who would be your guest performer?

How does it feel being signed to your own label?

Nem: It feels good being signed to our own label, because ownership and creative control is important; but we have so much more to grow and levels to reach.  We want to tour the world, and work our music abroad just as we do in the states.  A major label that understands our vision and can help us see through it would be nice.

Dolla: I like to brand EDUBB and everything that we represent.  We sell merchandise, WHOOTY gear, and DUBB gear. You can check then online at www.whootyshop.com. Ladies can get their WHOOTY booty shorts yeah! We are all about making our impact from music to film, to business. We are building a model for us to become successful from.

Tell us something about yourselves that no one knows?

Nem: We performed at a Prince after party in Carolina.

Dollar: We have recorded a song with Layzie Bone from Bone Thugs n Harmony.

Johnny Boi: I once wore a life size diaper on stage once!

Where can we see you guys next?

Nem: Look out for our club smash ‘Rain Boots’! We are also releasing our projects in March, REDCUPLYFE featuring the Ying Yang Twins, Lloyd and more. Legends Of The Fall album featuring Layzie Bone and More.
Check out EDUBBS Networks: