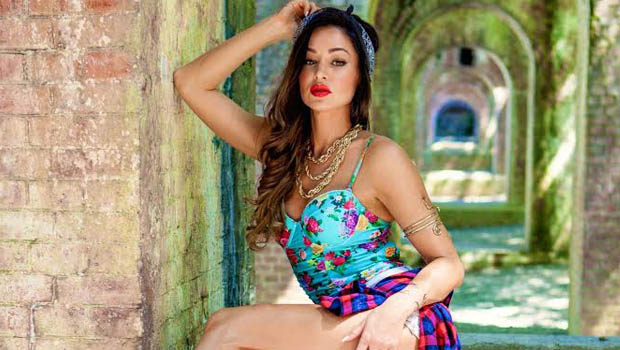 The music scene is strong in Australia, many Urban artists’ are finally getting the recognition they deserve and Brisbane R&B star Elesia Iimura is one of the artist that demands your attention. She captivates you with her sultry vocals, and an image that you can’t seem to take your eyes away from. Elesia just dropped her recent track ‘Believe’ which has gained significant attention on blogs and radios across Australia.

Flavour Mag sits down with Elesia and chats about the inspiration behind her raunchy ‘Believe’ video, why she loves the UK culture, and about her next video clip which will be filmed in Jamaica.

You were in Japan for a bit, tell us about that.

Touching down in Japan I always feel that sigh of relief like I’m home. I can’t speak more highly of the kindness, consideration and generosity of the people, and now I crave the food. For me, it is perfection. I may sound biased but it’s the best place in the world.

It was a very brief trip based around being with my father on Father’s Day, but I managed to get some promotional work in. I also had two days of photo shoots in the most exquisite locations I’ve ever shot in. One of which was in a bamboo forest at the foot of the mountains in North Kyoto. The air itself felt so mystical I was able to channel the samurai warrior energy that lingered.

You released ‘Believe,’ what was the inspiration behind the video?

With ‘Believe’ the focus was on getting the emotion across through a series of visually captivating vignettes and cutaways of interaction between the couple. I wanted to create a dreamlike atmosphere channelling costume inspiration from Victoria’s Secret fused with street culture. One thing I was certain of was that we would make use of the elements fire, wind and water but I never thought we’d end up lighting a beautiful bed on fire!

There are a bunch of outstanding upcoming artists well deserving of international recognition, but the scene is here is just too small to support it. On the other hand, urban street fashion is fully infiltrating and becoming a culture that is taking over. This is great to see. Let’s just hope the music does too. Are you working on any new projects?

Yes, I always have at least two projects on the go.

Have you been to the UK before?

I absolutely love the UK; London is one of my favourite spots. I remember being taken to a hip-hop club down in Piccadilly Circus called ‘Browns’ which blew me away. London city breathes culture and life. I promise to be back there performing for you all soon.

You’ve done a bit of acting, is that something you’d like to do more of?

Sure, I’m totally up for the challenge and exploring more of that side of me.  At the end of the day, any medium of self expression when delivered with confidence can be called art and can connect, uplift, entertain and inspire people.
You’re next video is being filmed in Jamaica, can you tell us about it?

I am bursting within just at the thought of this project. We will start filming in Kingston the week before Christmas with Damanic Visuals. It’s still in the making but let me say that if I can share even a taste of the aliveness, the rawness and the inexplicable energy of this place, my job is done. Bless up.