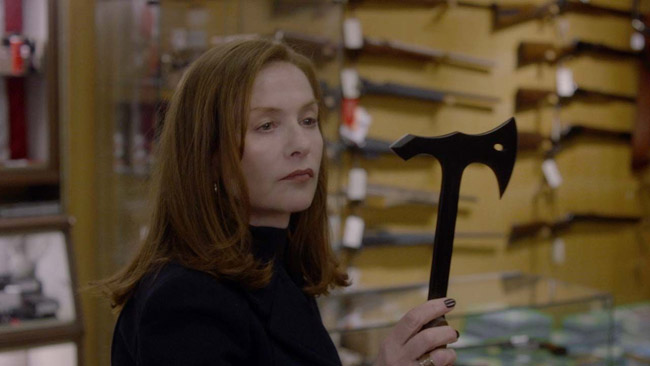 Can you make a comedy about rape?  Controversial director Paul Verhoeven has, in the shape of Elle.  How much you laugh at it depends on your sense of humour.

The screen is completely dark.  Then animalistic, rutting noises slowly emerge, sounds of pain.  People are having sex, but it doesn’t sound a pleasant experience and we soon realise why.  The man is in black, his face concealed by a ski mask so neither we nor the woman involved can identify him.  It’s sex, but it’s also rape.

After those noises and discovering what’s happening, we’re then treated to the aftermath and Michele’s (Isabelle Huppert) memories of what happened.  The rape has been watched throughout by her grey cat (a cat would most likely have run away, but it’s a neat cinematic device nonetheless) and the camera moves from its expressionless face to watching the rapist do up his trousers.  Michele is a crumpled mess on the floor.  Her frequent and many flashbacks show what she would have liked to do to her assailant in revenge.  We’re not spared much.

But this isn’t Law And Order Special Victims Unit, so she doesn’t tell the cops.  Instead, she clears up the broken glass, takes a bath and a few days later over dinner, tells her ex and her friends.  To the outside world, she’s remarkably composed to the point of cool about the whole thing, not the shattered victim of abuse that you’d expect.  And, away from what a certain judge notoriously described as “no great trauma” – which is what it appears to be for Michele – she is the highly successful boss of a video games company with a strong line in highly sexualised content.  Could this be a clue in discovering the identity of her attacker?

Beneath that icy, waspish exterior, she’s damaged goods when it comes to relationships of any description.  She and her mother, who is caked in thick make up, bicker constantly.  Her father has been in jail for years, serving time for horrible crimes that the media implied she was involved in.  And she despairs of her naïve son who has settled down with a pretty, temperamental young girl who is apparently carrying his baby.  Even though the child most definitely isn’t his.

While scenes like that are undeniably funny, and the film itself has a decidedly twisted sense of humour, from a female perspective it also provokes a deep feeling of unease, and that’s down to the subject matter.  It’s balanced, though, by a tremendous performance from Huppert, one full of subtleties, with just the blink of an eye or a twitch of the mouth changing the mood or emotion.  It’s made all the more impressive by her character being so unsympathetic that, although she undergoes rape, a bad car crash and other personal traumas, we never really empathise with her.  She is truly brilliant.

Verhoeven leaves some of the ends deliberately loose.  Michele’s hunt for her rapist is full of Hitchcockian red herrings and the rapist’s motives are never wholly clear.  There are even a few scenes that don’t make complete sense so the end, when it arrives, comes with a certain emptiness.  Which rather sums up the film.  When Michele decides to defend herself against more attacks, she learns to shoot and is bang on target.  Verhoeven, on the other hand, is slightly wide of the mark.

Elle is released into cinemas March 10