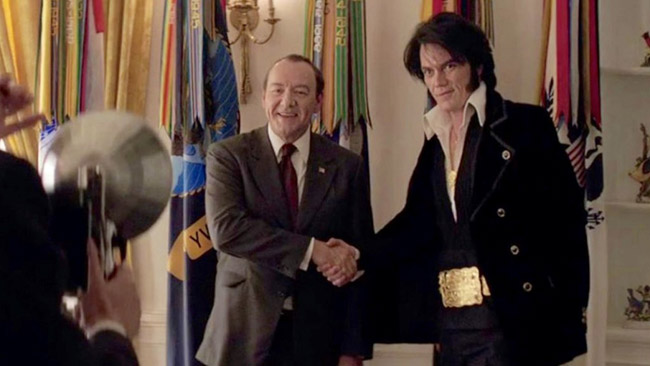 Back in 1970, the King of Rock and Roll, Elvis Presley, posed for a picture with the then president of the United States, Richard Nixon in the presidential home of The White House and this is where the story begins for Elvis & Nixon.

Elvis & Nixon proceeds to tell us one version of events that led up to this famous event, It’s widely known Nixon didn’t start recording his meetings in the White House until 1971, so anything could have happened. Is it all a fabricated tale or simple truth, that’s down to the audience to decide? But when you have the likes of Elvis’s own personal friend and confident Jerry Schilling who is played by Magic Mikes Alex Pettyfer aiding the production of the film from Elvis’s side it makes you wish this strange and wonderful tale had an element of truth behind it. One day in 1970, Elvis, played by a gentle yet frustrated Michael Shannon, has an absurd idea. Disillusioned by the path the younger generation are heading down he decides he wants to be an undercover federal agent at large and the only way he can obtain this ‘honour’ is to approach the president, Richard Nixon, played by a portly looking Kevin Spacey to convince him to give him the badge.  After writing a letter to the president, requesting a meeting, Elvis’ hand delivers the note to the guards at the White House.

Nixon, who was notoriously known for not knowing how important it was to show an understanding of how to play the media and follow its hype flat out refuses to even entertain the notion of a meeting with a rock star, However, when Elvis’s buddies Jerry and Sonny (Johnny Knoxville) find out the president’s daughter is a huge fan they hatch a deal with the president’s flunkies which enables that all important meeting. With Director Liza Johnson bringing to life a fluffy comedy we still have periods that pack no punch at all, it lacks certain energy or any real gumption in places which makes it lose its momentum. Especially when the script tries to look too deep behind the persona of each man and what makes them who they are. It tries to take us on a personal level which in these circumstances really doesn’t sit too well.

Michael Shannon commands his role as Elvis, plus he has a lot more screen time to his big name counterpart Kevin Spacey. Shannon plays Elvis’s paranoia, which by the 70’s had well and truly set in, with believable grace. Although looking like Elvis from the outside, apart from the costume, he couldn’t be further away. He looks more jaded and exhausted from the life he has made for himself. Was this a factor the scriptwriters wanted to portray in this depiction? Spacey too has Nixon’s mannerisms and pure ignorance finely tuned.

With so many documentaries and biographical films surrounding the undisputed King of Rock and Roll, Elvis & Nixon takes a slightly different route with a story based on a few testimonies and documented happenings around this one event with absurd and outrageous ideas but being Elvis this was probably all just a normal adventure in his life.