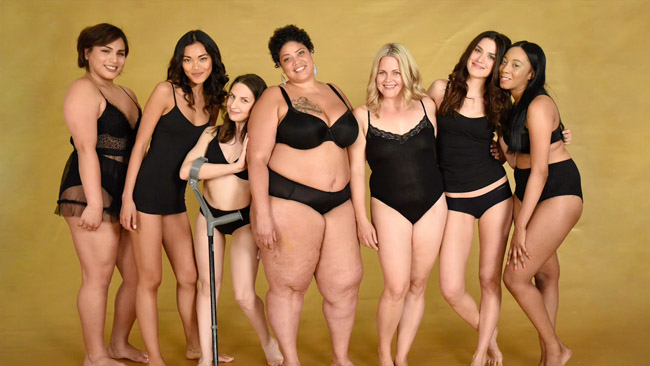 With the phenomena of social media and the internet at the centre of global culture, it seems crucial that the discussion of body image is addressed.

The conversation has actually been happening for a very long time, but without ever really managing to break the surface of the blanket of mass media that surrounds and dictates our lives every day. Nowadays, though, with the ability for anyone to have a voice and it to be carried around the world, the conversation might finally start breaking barriers for good.

This seems to be the case for viral sensation Taryn Brumfitt, a businesswoman and mum of three from Adelaide whose before and after body photos travelled globally. This was due to their unconventionality, as an image of her with a slender tone posing in a bikini was actually the before photo, presented alongside her happy, nude after photo of her current weight where she no longer has this extreme trim physique.

This is where Brumfitt’s documentary, Embrace, begins, as her simple act of uploading a self-loving image sparked commotion, both positive and negative, as the image spread. But ultimately what Taryn was left with was an overwhelming amount of touching emails, some of which we get to hear on screen and which essentially are the premise of the film. Many people opened up about their struggles with body image and throughout the hour and a half runtime, we get to meet people from all around the world and walks of life to hear their stories.

First off, Taryn meets with one of the editors of Vogue in Australia. As media is essentially the cause for the mass crisis of body image issues, it was essential Taryn spoke to someone in the industry, albeit brave of her. Unexpectedly straight-talking and honest, the conversation between the two covered magazine’s history in women’s lives and reveals stories of token plus-size model shoots that even the crew themselves didn’t want to be associated with. There are many shocking moments throughout the documentary, this being the least. Taryn meets an anorexia sufferer, Tina, who’s extremely gaunt figure is hard to look at without invoking a sense of helplessness and upset of what caused her to develop, and still not get over, her illness. Holding back tears, Tina didn’t have many answers but urged young women to never start because it doesn’t stop.

The documentary is dealing with real issues that can be hard to listen to. A cosmetic surgeon picking apart Taryn’s body to demonstrate the extent of the bodywork that’s normalised in Beverly Hills, is an uncomfortable watch because we know Taryn’s not taking this criticism seriously yet this doctor is completely real and does this to women on a daily basis.

That being said, what the film does brilliantly is balance these strong emotions and revelations, with real heart-warming pieces. A really small yet poignant moment that delivers this is when Taryn does a naked swim in Sydney and relays back straight after to the camera how she witnessed a woman shout ‘Oh my God – that woman has one boob just like me’. Taryn’s voice cracks and it’s hard not to feel emotional at hearing someone’s sheer joy and finding someone else just like them.

Essentially, we know the damages of the cosmetics, beauty, fashion industries and many more on women’s and men’s body issues. This film doesn’t go out to tell us what we already know but show us real people because that’s what’s more important to Taryn. She’s a brilliant on-screen personality to follow and spend the 90 minutes with and she’s done a fantastic job in delivering a message that can and should be heard by everyone.

Embrace in cinemas across the UK from 16th January.