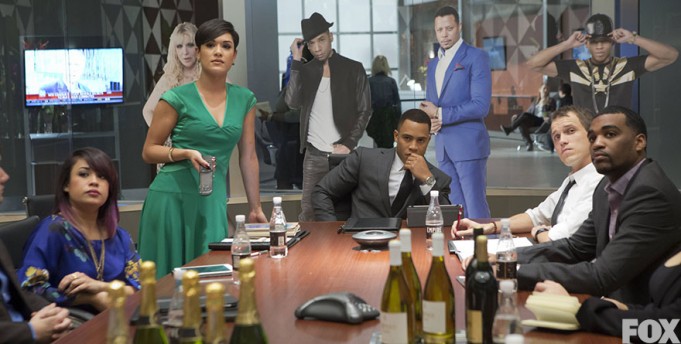 Much to everyone’s anticipating excitement the wait is almost over, the UK is gearing up for the arrival of one of the biggest American television dramas so far this year – Empire, when the popular show airs on E4 on Tuesday 28th April.

The extremely engaging and well produced show created by Lee Daniels and Danny Strong, aired on Fox at the beginning of the year in the US, and focuses on the highs and lows of the hip hop music industry. The show showcases the rise of Empire Entertainment, one of the most successful record labels in the world. For first time viewers who have heard so much about the highly rated show and absolutely do not want to miss out, Flavour Magazine will let you know exactly what to expect over the next 12 weeks.

Faultless renowned actor Terrence Howard plays the main character of the show, and literally embodies the exact characteristics of the exceptionally talented, wealthy, and hugely admired Hip Hop music mogul and CEO of Empire, Lucious Lyon. Almost 20 years ago, the former drug dealer and his ex wife Cookie played by the amazing Taraji P, Henson literally make the show what is it, and they display such an amazing connection on screen, that it is hard to imagine anyone else embodying their roles. They are definitely characters that impress, with chemistry and dynamics in their solo scenes which are often powerfully incredible. Cookie Lyon at the opening of the show comes back home after spending 17 long tedious years in jail following an unexpected drug raid. The idea of creating a musical Empire was indeed Cookie’s and Luscious’ together, with Cookie supporting Lucious when they were young teens in creating, writing, and producing music. She returns to reclaim what is rightfully hers, a large percentage of the company, in fact half and she will not let anything or anyone stand in her way. Her character exudes such strength, and personality adding just the right amount of humour to enlighten the show throughout.

As the storyline unfolds we learn that Lucious is suffering from a life changing illness known as ALS, and doesn’t have long to live. Together, Cookie and Lucious have three very talented sons, respectively. Andre Lyon (played by Trai Byers), Jamal Lyon (played by Jussie Smollett), and the youngest of the Lyon brothers, Hakeem, (played by Bryshere Y. Gray), and Lucious intends to chose one of them to take over, eventually lead, and run his Empire. Expect a refreshing array of talented artists and actors, including a new actress who plays the role of Anika Calhoun, (played by Grace Gealey), she is the current long term partner of Lucious, and on Cookie’s arrival swiftly becomes Lucious’ ex fiancée! She developed the cynical nickname Boo Boo Kitty, as the head of A&R for Empire Entertainment.

Business partner and long term friend Vernon turner sees the return of Cool Running’s hilariously stern character Yule Brenner, Malik Yoba – as the chairman of Luscious Lyons ever expanding successful company. Ensuring that everything operates smoothly in the daily running of the colossal company is Becky Williams, Lucious’ executive personal assistant, played by Precious star, Gabourey Sidibe. Such a plethora of talented actors and actresses, you will definitely be entertained. Empire is a show that many will love, The storyline is simple enough to follow yet the plot thickens in the form of so many unexpected turn of events that it is gripping to say the least, even from episode one. Without giving too much away sit back and enjoy! Let us know what you think when it airs in the UK. We cannot wait.