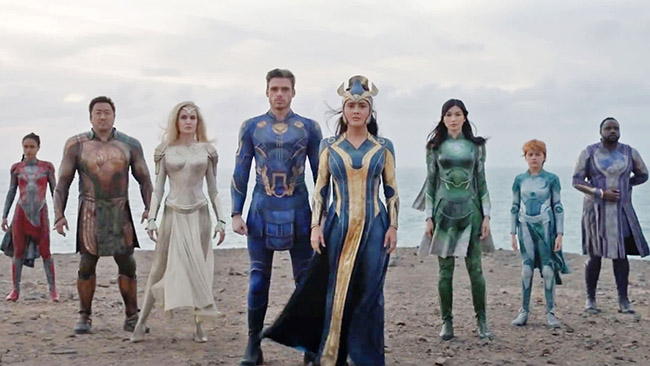 With the Marvel Cinematic Universe Phase, 3 done and more or less dusted it’s time for the MCU to herald in a new era in phase 4 with a whole bunch of new faces.

Directed by Oscar-winning art-house director Chloe Zhao gives this a more stylistic tinge filled with firsts but with all the blockbuster superhero humour and fanfare.

This multi-cultural motley crew of Eternals have made the earth their home for the past 7,000 years. Created by the cosmic gods known as Celestials, they were sent to earth to protect humankind from the Deviants – a kind of monstrous mammal that could be very closely related to Predator. Having killed the Deviants over many centuries, the Eternals – wry in their fight and their friendships with each other – part ways. When the present-day arrives the Eternals have to reunite once more with an event known as the Emergence that threatens everything they hold dear.

Across the course of the global road journey, we come to know nearly each and every one of the 10 new superheroes with flashbacks over the centuries. Gemma Chan’s leading hero Sersi can turn anything (apart from humans) hard to soft. Living in London and working at the Natural History Museum she has a romance going with boyfriend Dane played Kit Harington – very much in the same vein as Chris O’Dowd’s role as Jane’s boyfriend in Thor: The Dark World. Low and behold, she was once married to the chiselled eyebeam throwing Ikaris (Richard Madden) – enter the first sex scene ever to appear in a Marvel film.

Also in another first, the film plays witness to its first-ever gay kiss, not just hinting at it, Zhao does not attempt to vaguely hint at the idea but lovingly praises this love union. Contrary to rumours, no it hasn’t got anything to do with Madden’s character either. Kumail Nanjiani brings the humour, as expected, with Kingo, a polished and slightly vain superhero that has made himself a name as a Bollywood superstar. All the while Barry Keoghan’s Druig takes on the angry mind controller who questions what good is it being superheroes when they can’t even prevent humans from committing genocide. The remaining heroes make vaguely any lasting impact.

Zhao brings her flair for the beauty of the eye shots over vast landscapes and setting suns but remains on the tinge of darkness in revealing the truths of worldly myths and historic events created by the Eternals. Least we not forget this is a CGI Marvel blockbuster and it still delivers on the celestial plains of epic proportions. It’s a cosmic opening for the next phase of the Marvel saga.