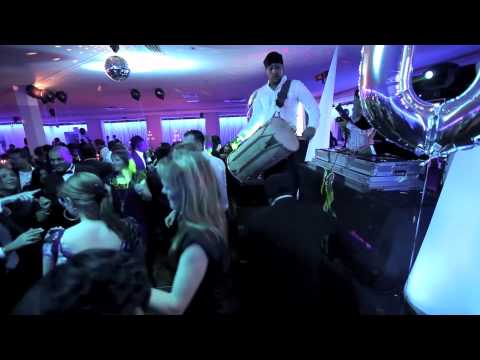 We’ve seen many walks of life come on to the music scene. One of them is Drumline Entertainment, a well-known Indian (dhol) drumming band in the UK Asian music scene. They infuse the beats of the Indian drum with western and eastern music, including the sounds of reggae, funky house, bhangra, hip hop and R&B. Proven to entertain crowds at parties and club nights, Drumline have taken the beats of the dhol worldwide. Watching them perform at a live gig, you really can’t take your eyes off them! Before they went off on tour to Dubai, head drummer Jazz, took time out of his hectic schedule to talk to Flavour…

So what attracted you to playing the Indian drum, the dhol? I started playing the Tabla, which is a set of small Indian drums when I was 8-years-old. I then progressed on to learning other percussions such as the dholki, but more so the dhol. I have always had a passion for music and did a few DJ nights, but I wanted to do something more, which is why I decided to play dhol professionally.

How did Drumline come about? It was about 3-4 years ago, we just had a group of 4 drummers to start with. As we went along we got a lot of exposure, and decided we needed a name, so I came up with Drumline, which represents what we do.

What makes Drumline unique to other drumming bands? We don’t just play the dhol, we infuse different beats into our music from the western side and mix them with eastern beats. When we perform on stage there’s a lot of entertainment involved rather than just standing there, we interact with the crowd and get them involved. It’s a great feeling when we see the crowd dancing and enjoying our performance.

Which artists have musically inspired you? A lot of old school bhangra artists such as Malkit Singh MBE, iconic Tabla player Zakhir Hussain, and Apache Indian. He was one of the first Asian artists to hit the Jamaican vibe and become a successful UK artist.

You have a set piece as part of your routine…what type of music do you use in your piece? We have got a mixture of genres that we play to in our set piece. We start off with bhangra music, then it goes into funky house and then we’ve got samples of Kid Cudi and Rihanna. Sometimes at gigs, we have the DJ mix in songs; usually what’s popular at the time. So whatever the crowd likes we adapt to that. The set piece is unique to Asian drumming bands, it’s what makes us different to others, and many other drumming bands have gone on to do the same now.

Which is the best country you have performed in? Israel, it has the best atmosphere! We played with indie band Firewater in Israel, I was playing as part of another dhol group, The Dhol Foundation. Plus, Australia is an amazing place to perform.

Which country has the best crowd? It has to be home, in UK; when you see people’s reaction to the dhol, they love it! They love the vibe and music. But even abroad at club raves, the crowds love the dhol.

Is it true that you performed at a Premiere League football match? Yes, it was in 2010, Portsmouth V Birmingham game. It was amazing, we played on the pitch and it was broadcasted on ITV. There was a real buzz at the ground, while we were playing. We got a lot of exposure, the crowd and players loved it.

Which events have been memorable for you? Performing with the Sugababes last year at the Asian Music Awards. We were involved in the Asian re-fix of About a Girl. That was good and they really enjoyed it, so hopefully we’re looking to work with them again in the future. We have also worked with AR Rahman on his album, who has collaborated with the likes of Pussycat Dolls- that was amazing! And last year we performed at the Graduation Ball, alongside Tinie Tempah, The Saturdays- we were on the same bill as them.

How hectic can your schedule get? On a typical weekend, we normally do about 8 to 10 functions which include, concerts, gigs, weddings. They can even start from Thursday evening; we have to travel from the likes of Birmingham, London, Manchester literally nationwide, tomorrow we will be heading to Dubai. So it’s very hectic, but I love the buzz and once you’re on stage you feel every minute is worth it.

Who has been the best group or artist that you have played with? It has to be Kaiser Chiefs at The Roundhouse, which was for BBC Proms- an amazing experience! And Eastern artist has to be Malkit Singh MBE and his live band; he’s a huge bhangra icon.

Who would you love to collaborate with? Skepta, would love to do a remix to Cross My Heart, oh and Rihanna!

Have you had any frantic fans after you? (Laughs) no comment!

What’s been the weirdest booking or event for you? We actually got called to play at Heathrow Airport, while a bride and groom walked out of arrivals. But, I didn’t do it, passed it down to our junior drummers.

You also teach dhol classes on the side don’t you? Yeah, I love teaching! We teach youngsters who are passionate about music and the dhol.

What’s in the pipeline for Drumline? We want to expand the group, at the moment we have eight drummers, we’re looking to get more, as we’re getting busier, with more recordings, industry music videos, and we’re looking to produce our own video. We want to collaborate more with the western music industry- so we’re working on that.

Any plans of a drumming album? Not at the moment, but people have asked us to do singles, which might be in the pipeline- so you never know!