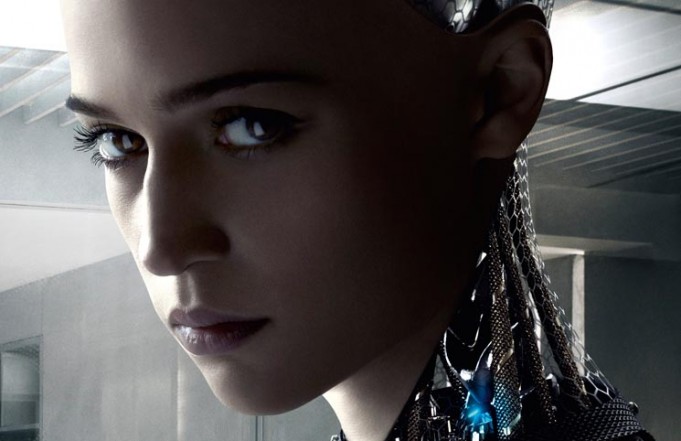 When Caleb (Domhnall Gleeson), a 24 year old coder at the world’s largest internet company, wins a competition to spend a week at a retreat belonging to the company’s reclusive CEO, Nathan (Oscar Isaac) he never imagined how much his life would change.  But when Caleb arrives he finds Nathan lives in the middle of nowhere and he wants him to participate in a fascinating experiment with the world’s first true artificial intelligence, housed in the body of a beautiful robot woman, Ava (Alicia Vikander). With no access to the outside world, Truths, emotions and motives are blurred as the relationship between Caleb, Ava and Nathan intensifies.

Written and Directed by Alex Garland, the man better known for producing and writing films such as 28 Days Later and the Beach. In fact Ex_Machina is his directorial debut and what better way to break into directing than with a Sci-Fi thriller which intrigues the hell out of you. Why does it intrigue? Well with the ever advancing steps in technology this story could very well be real life much sooner than you think. Films about AI’s are not a new thing but never less this does not make this an extremely intriguing watch. The majority of the film is set in a remote beautiful location, within a thoroughly modern house full of gadgets and major security measures set in place where no one can get in or out without the correct pass, completely cut off from the outside world, This means the amount of characters we witness are extremely small, in fact only 4 actors for most of the film. Don’t be put off though as this just infuses the film with even more intensity. My only bug bare about the film was the use of extremely techy dialogue in places which completely lost me at times, but being a film of this nature well it’s to be expected really. I have this urge to say that the film is slow as nothing really happens for 90% of it, but there is something quite genius and highly intelligent about this storyline that just keeps you gripped and totally mesmerized by what is unfolding on the screen in front of you. Garland doesn’t make this to intense though, quite cunningly he has thrown in quite a bit of humour to lighten the mood when it may feel it’s becoming slightly overwhelming.

Each cast member where totally convincing, Oscar Isaac as the egotistical and of course slightly eccentric Nathan steals the film, he made his character seem so real, his performance came over so effortless and actually really convincing. Domhnall Gleeson as Caleb actually seemed a little flat, there is no real connection between him and the audience, and he leaves you feeling slightly cold towards him. Lastly, Alicia Vikander as the beautiful robot woman was great; she had the robotic moves down to a tee. She not only convinces you but also fools you too.

Ex-Machina is a disturbing, intelligent and gripping film which will have you glued to the screen throughout and you just can’t understand why. Ex_Machina opens in cinemas 21 January 2015