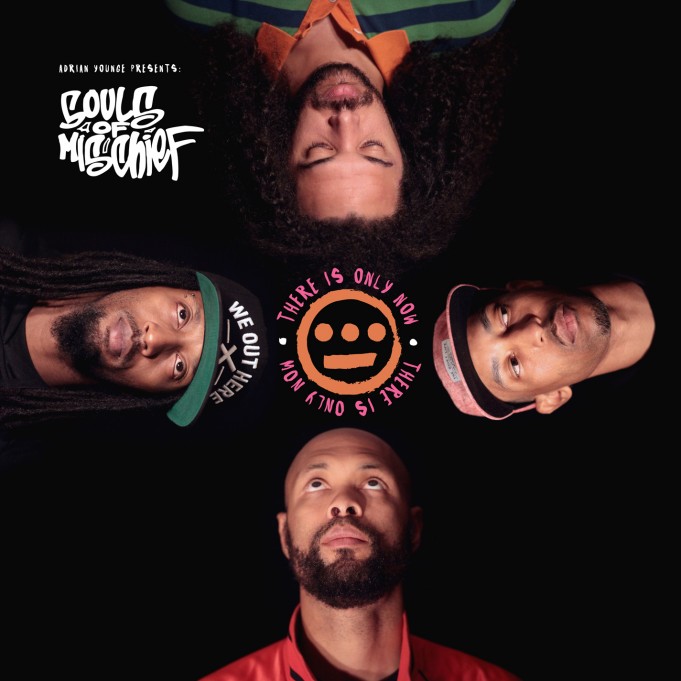 If you want to know about music you could not get much better than Adrian Younge the producer and instrumentalist from Los Angeles who just happens to be an Entertainment Lawyer. Hip-hop to the core, Younge brings a production that purposefully harks back to a retro sound of old skool funk that he skillfully incorporates to bring hip-hop that positively baulks at some the commercial hip-hop of today.

In a match made in hip-hop heaven Adrian brings his unique productive blend of the old and the new onto the sixth album There Is Only Now for the talented Souls Of Mischief.  Far from hip-hop awash with dance riffs, clear chorus and hook elements this is an organic concept album with a clear focus on lyrical content and retro sounds that give this album a warmly nostalgic feel while subjects of love, revenge and loss are explored-it’s hip-hop for fans of the movement that want their grey matter stimulated rather than beaten to a pulp by ‘commercial hip-hop’ lost in David Guetta dance melodies ‘yuck’

I started out as a hip hop producer and then I realised as I went on that the music that I actually liked was live music. All this music that was being sampled by hip-hop artist then and now was from that era of live music groups like Wu Tang and Tribe Called Quest really exploited that.  I wanted to go back and learn those instruments and create real compositions so I spent time really learning how to record on a tape and how to play like they played and just get that old sound that I could hear. I was listening to everything and it really just expanded my sonic landscape and compositional perspectives on music and I incorporate that in my music now.

I definitely feel the most complete as a producer. I did the Black Dynamite (2009) score which was a blaxploitation funk score-it was a psychedelic hip-hop, meets soul, meets prog rock (the track was actually sampled by Jay Z and a few other people). I then did the Ghost Face Killah album Twelve Reasons To Die (2013) and so I was around doing a load of different music which brings me to this album to date which is for me (humbly speaking) my best work to date.  It is the album I am the most proud of whether people think it is my best work they will have to decide. Essentially I make music for myself and then if people like then so be.

Working with Souls Of Mischief.

I wanted to make an album that was like if Bob James and Herbie Hancock got with Souls Of Mischief ad Tribe Called Quest with that old sound but kind of contemporary. Doing an album and having four emcees who are the quintessential emcees of the era-it’s just one of those things you grow up hoping it will happen-I was working with my inspirations. Working with them was difficult and it was a hard graft because I live in Los Angeles and they live in the Bay Area Oakland so that is about a five hour drive for me. I would make music and they would come down and stay for a week or two and then go. We would literally be making music twenty four hours a day just sleeping and then getting up and making music again it was crazy but the end product was so worth it.

Ghost Face Killah and other collaborations.

Well there are a load of things in the pipeline some of which I cannot say but I will definitely be working on another project with GhostFace Killah. I love working with Ghost he is of course opinionated but what I love about Ghost he gave me a chance to prove myself so I have a lot of love for him.