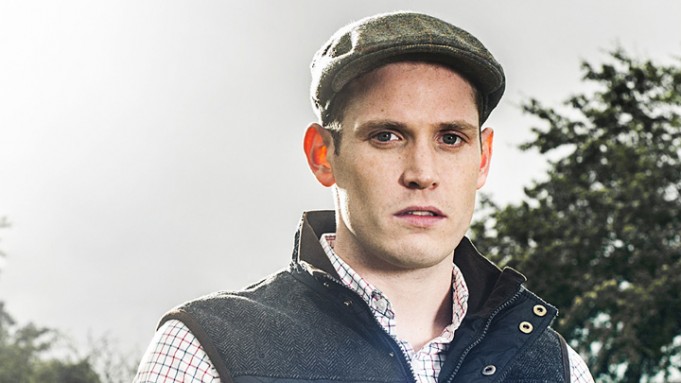 If you have been glued to your seat every Monday night at 10pm, like most of the nation have, then you would have noticed the superb acting from Tommy McDonnell in E4s new hit drama “Glue”. Here at Flavourmag we are hooked on the, who did it?, drama and we just had to grab an exclusive chat with Tommy.

Tommy McDonnell is a 26 year old actor from South East London who is making a name for himself by appearing all over our TV and Cinema screens. Recently Tommy has appeared in the hit UK film “Starred Up” along side Skins star, Jack O’Connell, secured a part in ITV’s successful “Cilla” drama series and is now on our screens every week as Dominic in “Glue”.

Here’s what Tommy had to say when Flavourmag’s Joe Waller caught up with him to discuss the industry, the acting, the struggles and of course the hit TV shows, Films and Theatre productions.

Hi Tommy, the last year has proven to be a successful year for you, with you securing yourself some major roles in film and TV. How does it feel to be riding high at the moment?
A mixture of pride and appreciation. I’m very proud to be where I am in my career at the moment, but I also feel very fortunate as well because this isn’t an easy industry to crack and that’s where the appreciation comes.

We are guessing these roles didn’t just fall into your lap by luck. What has your journey entailed and what has it been like so far to get to where you are now?
No of course not, nothing ever falls into your lap. You have to work for something if you really want it. All the parts I have played so far, I had to put the work in to get them. For instance, in this industry you make relationships with casting agents, directors, producers etc and if you get called into the room to audition for a part and go in unprepared, you’re not doing yourself any justice at all. Whereas if you go in prepared and confident knowing you’ve put the time in, this will show. It’s also important to make an impression in the room so that the casting agents, directors, producers etc will want to see you again, even if you weren’t quite right for that part.

How old were you when you realised acting was the perfect career for you and what first steps did you have to take to kick start your career?
I always knew there was something pulling me towards acting at a young age. But it wasn’t really until after school I made a definite decision I wanted to actually pursue it. This resulted in me going to drama school, which I’m more than happy that I did.

We can see that you started studying acting at a young age. How important do you think it is to learn your craft young before pursuing an acting career?
I thought it was important to go and learn my craft. I knew I wanted to be an actor but it didn’t mean I knew everything I needed to know. Drama school really helped me with this – helped to fine tune things. Plus it gave me the perfect opportunity for breaking into the business via a showcase. But I’m always learning and that’s exciting. Acting is a very hard business to get into and an even harder business to make a successful living out of. What risks have you had to take along the way and what hurdles have you had to get over?
Jobs can be few and far between so the hardest thing for me is keeping myself busy when out of work. I have to find things to do to keep ticking by, otherwise it’s easy to get yourself into a slump. You have to keep active to stay positive.

What advice would you give to aspiring young actors looking to start a career in the business?
To really work for it because it’s not an easy ride by all means and good luck to them – it’s always lovely meeting aspiring actors.

You have taken on many different roles such as film, TV and theatre. How different is each area?
There are a lot of differences and a lot of similarities. I’d say theatre is more physically demanding as it’s live. When you’re out on the stage you have to be in the moment no matter what happens. For TV and film, if something goes wrong you can always ask for another take. If that happens on stage you have to find a way through it – which is exciting. But no matter what you’re doing, whether it be TV, film or theatre, you just have to be open and truthful.

Recently you starred alongside Jack O’Connell in the successful UK film “Starred Up”. How did this role come about?
Well I had been very fortunate to have worked with the casting director Shaheen Baig before, so it was all thanks to Shaheen. What was it like working with Jack O’Connell?
Brilliant. He was very professional and he is great at what he does. When you work with good people it only brings out the best in you.

Your character was a prison officer in the film. How did you prepare yourself for this kind of role?
Research. Also, the writer Jonathan Asser had worked a lot in prisons so he knew a lot of the answers to my questions as well, which was obviously a massive help.

What advice would you give to young actors taking on a role that is totally out of the ordinary compared to their normal lives? How can they prepare to get into character?
Once again, do the work. Read up about what they do, how they do it, everything and anything you can find out. But don’t lose sense of who YOU are. There’s no escaping that, and this will go into the character too. Which isn’t a bad thing.

You recently took on a small part in the successful ITV drama series “Cilla”. What was it like working on a series based around true life events?
Working on something that has happened in the past is a gift, because you have so much to work off. Back to what I said before about research, it’s all there. You’re playing someone who actually existed.

You are currently on our TV screens every Monday night in the hugely popular E4 drama “Glue”. How did this role come about?
I had worked with Eleven Films before so I had a relationship with them already. Then Des Hamilton the casting director called me in to audition. But that’s not to say I didn’t have to work to be a part of it. I went in three times for various roles before being offered the role of Dom. I was over the moon when the offer came in. It was a privilege to be part of the show.

You play Dominic, the assistant trainer at the stables. What can you tell us about Dominic?
Dominic knows what he wants out of life. He is very sure of it. He might have to play dirty to get it sometimes, but under his hard persona there’s a lot more going on.

Dominic is in a relationship with police detective Ruth. How vulnerable does this make Dominic to the murder investigation?
It makes him very vulnerable. It also plays with Ruths emotions massively making her vulnerable too. Everyone has vulnerability in the show.

What can you tell us about what is in store for Dominic?
Not much I’m afraid, you will have to wait and see.

The nation is gripped to the ‘who did it?’ storyline. Were you shocked when you found out who the murderer was? How did you find out?
We were all shocked. My view of ‘who did it’ kept changing because none of us knew until we received the final script two weeks before the end of filming. And we had all wanted to know for so long, so you can imagine the anticipation right? And I think this is rubbing off on the viewers as well. Which is great.

The cast of “Glue” is full of young talented actors. It must have been fun working with such a cool young cast. What was this like?
It was lovely, they are all lovely. And we all became like a family because we were filming in quite a secluded area. We became close very quickly.

If you could work alongside any actor in the business at the moment who would it be?
There are too many talented actors out there that I would like to work with to list. Can you tell us a Flavourmag exclusive on Dom?
I was having a heartfelt scene with Ruth one day and instead of saying her name during filming I said Tina’s instead. I didn’t even realise until everyone started laughing. That was a funny moment – For everyone else.

What other young up and coming actors work do you rate at the moment? Who should we be taking notice of right now?
The entire cast of Glue obviously.

We mentioned earlier that you have taken on many different acting jobs in film, TV and theatre. What area would you like to focus on more in the future?
I’m open to be honest. I will be happy to keep working in all three.

Most of your past roles have been serious roles. What are your thoughts on comedy? Would you ever venture into comedies?
I would love to. I have done a comedy before and I thoroughly enjoyed it, so it is something I’m very interested in.

Can you tell us what you are currently working on at the moment and what can we catch you in next?
I have just finished filming a role in a new 3 part drama called Enfield Haunting for Sky and I’m currently filming a new drama for BBC called Murder.

What does the future hold for Tommy McDonnell?
More work and more fun hopefully.

Finally can you give us a Flavourmag Tommy McDonnell EXCLUSIVE?
Not very interesting but I love a good cartoon.

If you haven’t seen this young actor in action then you are truly missing out! Tommy McDonnell is soon to be a house hold name. Make sure you tune into Glue every Monday night to catch more of Tommy’s superb acting skills and brilliant work.