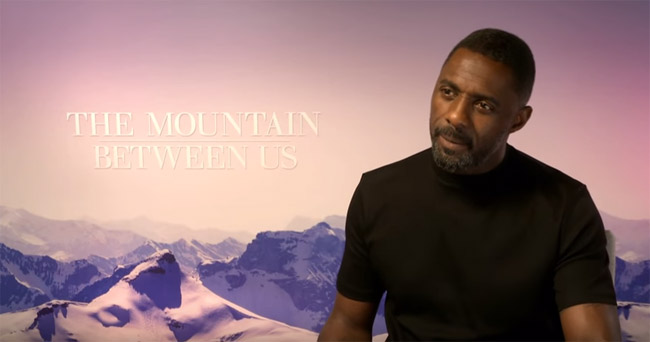 Friday the 6th of October see’s the release of the romantic survival film, The Mountain Between Us starring Idris Elba and Kate Winslet.

With that in mind, we sat down with Mr. Elba to chat all things about the film. Idris isn’t known for his romantic roles, so we wanted to know how he approached his intimate scenes with Kate Winslet, his relationship with the dog in the film – who funnily has a Snapchat account, and more. Our interviewer, Zehra Phelan also managed to get in a cheeky birthday request too.

Watch the interview below to find out exactly what that request was as well his thoughts on the film.

The Mountain Between Us Synopsis

Stranded after a tragic plane crash, two strangers must forge a connection to survive the extreme elements of a remote snow-covered mountain. When they realise help is not coming, they embark on a terrifying journey across hundreds of miles of wilderness, pushing one another to endure and igniting an unexpected attraction. The film is directed by Academy Award nominee Hany Abu-Assad and stars Academy Award winner Kate Winslet and Idris Elba.

The Mountain Between Us is out in cinemas October 6th.