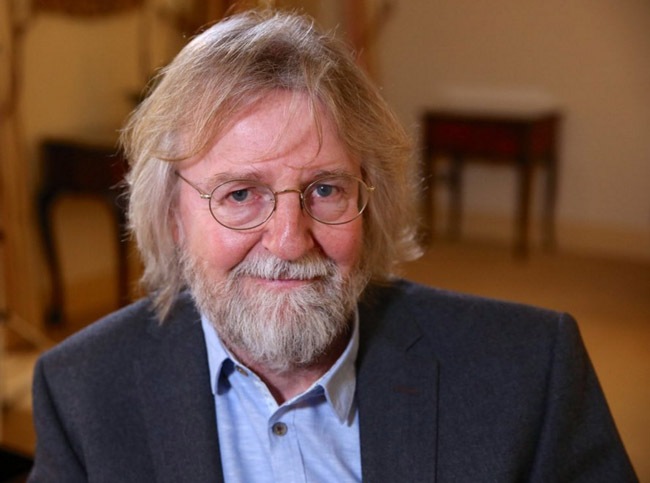 For the release of hit TV series, Vikings: Season 4 – Part One  on Blu-ray™ and DVD from 24th October, courtesy of Twentieth Century Fox Home Entertainment, we spent some time talking to show creator Michael Hirst about the series.

Hirst is an English screenwriter and producer, best known for bringing important periods of history to life with films such as Elizabeth and Elizabeth: The Golden Age, which saw Cate Blanchett as the virgin Queen, as well as the Emmy Award-winning television series’ The Tudors which starred Jonathan Rhys Meyers as Henry VIII and Henry Cavil as his best mate Charles Brandon, and Vikings.

We spoke with Michael Hirst on the importance of bringing history to life in Vikings, working with Travis Fimmel and what period of history we can expect to see from him next.

You’re best known for your work on films such as Elizabeth and TV Series The Tudors but you’ve taken a step further back in time with Vikings! What was the catalyst for creating the show?

The catalyst is actually an executive from MGM asking me if I was interested in writing it (laughs). Actually, my interest in Vikings goes back to Elizabeth in a way, After I had written Elizabeth – working title asked me if I wanted to write a movie either about the Romans or the Alfred the Great. So I thought I would do Alfred the Great, of course, Alfred the Great fought against the Vikings. I started to get very interested in Viking Culture and Religion and realised most of the things I thought I knew where wrong. It was a terrible fascinating period, Even though we have a limited knowledge about the period because in the Dark ages they were an illiterate race. As it happens that movie didn’t happen, I put my interest in my back pocket and waited for hopefully someone one day to ask me to write about the Vikings.

When talking about Vikings, people instantly conjure up this idea of a brutish type of people which isn’t 100% true – How do you go from that idea to creating the type of characters you have in the show?

There was a lot that I admired and wanted to tell people about. I think beyond that, you have to have characters in a drama that engage people, characters that people are interested in. It was a challenge. I remember people saying to me originally you won’t be able to write a show about Vikings because they are always the other, they are always the guys who break into your house late at night, rape your wife and steal your goods. How are you going to make them sympathetic? One of the ways was to fashion a lead character who was not a clichéd Viking. When you think of Vikings you think they are big, loud brutish kind of guys, but I don’t think of Scandinavians like that, they are thoughtful, quiet, introverted people. I wanted a quiet, introverted and thoughtful lead character in Ragnar Lothbrok. One of the things that helped was that Ragnar himself, the historical Ragnar, believes he was descended from the god Odin, Odin was not just the god of warriors he was the god of poetry who actually sacrificed an eye to look into the well of knowledge. So I decided that my principal character wasn’t travelling to rape and plunder, but travelling because he was curious, he wanted to explore. The other thing which surprises people I suppose because it’s so simple, but was to show that the Vikings were a Family orientated. The very first episode of the show, the first scene is where we establish they are warriors, the 2nd scene we see Ragnar at home with his wife, he loved his wife, he loved his kids, they were a family, he did things for his children and of course, that humanised them. In fact, it wasn’t too difficult to make these Viking central characters engaging. In most good TV shows the central character is very rarely just good, their flawed. Often, Gangsters or violent people, they have flaws but they are always, always engaging, you can’t stop watching them and wanting to know what they are going to do next. The way in which Travis (Fimmel) plays Ragnar in a way in which exploded the received opinion of what the Vikings were like. He is also compulsively watchable.

How much input do you have in casting and was Travis always going to play Ragnar?

We were desperately looking for a lead character. Right up to almost the beginning of production. It was a scary time because the show had been green lit by History so they were spending money on it and we still didn’t have either lead character. I was turning down all they were showing me because they were clichéd characters, they were big and loud. Travis actually sent in a self-tape that he had made in his kitchen in the Australia outback in which he didn’t pretend to be loud, he didn’t pretend to be Viking. The way that he read the lines, they way he interpreted them was very, very, attractive.

How closely do you work with cast members to develop their characters?

Pretty close, I’m pretty collaborative. It’s a collaborative business. I’m very open to suggestions if they are sincere and if they enrich the experience for the actor. What I don’t like is if one of the actors comes to you and says, even had read the script,  and they say my character would never do that and you have to say yes your character does do that because look there it is in the script (laughs). It’s a process, I’m very close to Travis, we spend a lot of time talking about Ragnar, I think it helps. I don’t like the show runners who refuse to engage with either the actors or the production crew. You have a duty I think to engage with everyone else who is involved in making the show.

Rollo (Clive Standen) is based on the great great great grandfather of William The Conqueror. That information must have been extremely hard to obtain?

I knew about Rollo, I knew about him from my research. What I actually did there was that he wasn’t the historical brother of Ragnar. I wanted Ragnar to have a brother and I thought that Rollo’s story was so interesting, so fascinating that I needed it as part of my story. I made a creative decision to bring their stories together and that worked out really well. You obviously have a major interest in History considering your past creations, why is it important for you to explore and share that knowledge through shows such as Vikings?

For a start, I would have to admit that the only things I could do at school apart from sport were English and History so I cleverly combined them. I never liked science fiction and I never liked fantasy. So I prefer to write about real things, one of the reasons I write about real things and real people is that it tell’s us something about our own lives. It tells us something about our own history. After all, I was born in Yorkshire, quite near York. York was a Viking town. All the villages around where I lived had Viking names. A lot of the English law is based on Viking law, Dane law. We shoot the show here just outside Dublin. Dublin was a Viking town, so History is continuous, My shows aren’t meant to be educational because it’s supposed to be entertaining and that’s what I am paid to do, write an entertaining drama that people want to watch. I am aware it does create an interest in the historical period.

The surge in interest in The Tudors when I was doing that. I was getting emails and letters and things from Teachers from around the world saying Thank You, my students are now really engaged with English history and The Tudors and we use the show to springboard discussions. When I went to the Oslo Boat Museum recently and the curator said thank you you’ve doubled our admissions here since the show. There is much more interest in Scandinavia, across Scandinavia in their own Viking history. That’s a very pleasing outcome. I think that fantasy can be very entertaining, but because anything to happen it’s actually meaningless. I think that writing about real people, real things and real events is meaningful. Personally, I spent a lot of time at various Universities when I was younger and the research part of my job, which is where all my shows start with a lot of reading and research, I find really enjoyable. Out of that research emerges characters, storylines, ideas and that creative process to me is a great and enjoyable part of the job.

What period of history would you like to explore next or are you already working on the next venture?

I have other things in the pipeline, but I think just about any period of history can be interesting because you just have to dig down a bit deeper. The clichés you have about any period of history are usually wrong, but I’m probably going to do something about the American Civil War. I might be doing something based around the 60’s here in England. That’s an interesting point, is the 60’s history? Because I lived through it.