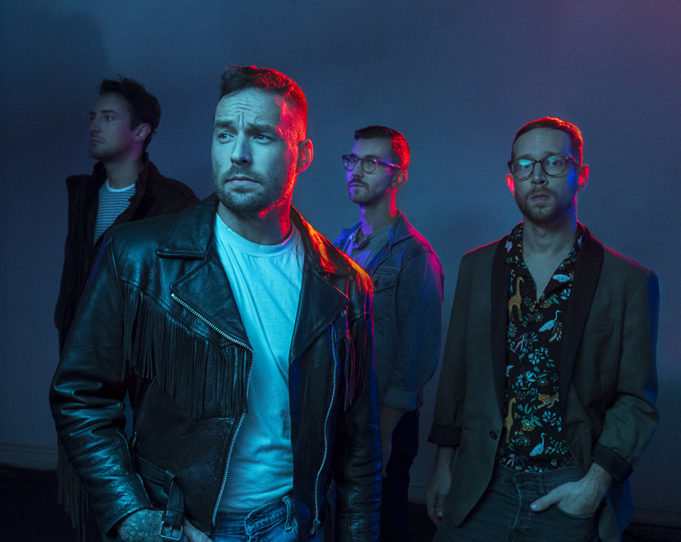 All the way from Lexington, Kentucky. Emarosa are back in the UK for their headline tour ahead of new album ‘Peach Club’.

With their post-hardcore era at the end, American band Emarosa take their sound in a totally new direction with their forthcoming album ‘Peach Club’ (out February 8th 2019). I spoke to frontman Bradly Walden about Emarosa’s new direction, fans and the best advice he’s ever received.

We’re super excited for your new album Peach Club, What inspired you and was it difficult going in a new direction?

B-It’s a pretty natural progression from where we’ve been headed the last few years. Anyone that listened to Helpless or the more pop leaning side of 131 could see this was inevitable. It’s probably the easiest transition I’ve ever made. It’s all easy for us, this the direction and album for the new rhythm nation. What was your writing process for ‘Peach Club’?

B- It was pretty diverse, I wrote a little with some producers and writers that I work with in Los Angeles. We also got down in Philly and wrote for a while before heading back to the west coast to collaborate with Courtney Ballard. I think we went into this unapologetically full of ourselves. We just made the record we wanted to make the way we wanted to make it.

What track from ‘Peach Club’ do you hope will be a fan favourite?

B- That’s a tough one, the small group of people we’ve shown really love ‘Cautious’. I think personally ‘Get Back Up’ is a really powerful song people can get behind. Ultimately you never know what the fans are going to love.

Could describe your new sound in three words?

Your UK tour starts this month, what can fans expect and how does it differ to previous shows?

B- We haven’t been to the UK since 2016. We’re bringing an entirely new presence, new songs, new moves. It’s all very refreshing for us as well as the fans.

Do you have any Pre-Show rituals?

B- We have a few things we all do for ourselves to get our heads right. We always have our moment right before we go on as a group. That’s special for us.

We know shows don’t always go to plan, what’s been your most embarrassing onstage moment?

B- There are too many to count, starting songs way too fast. Mics cutting out, I remember dropping from the top of the stage in 2016 Warped Tour and blasting my ankle to shit. I was limping for 3 weeks after that and damn near thought I broke it. I’ve fallen down many times, those moments are all my favourite. They’re humanising.

What’s been the best advice you’ve ever received?

B- “Sometimes life sucks and we’re the villain. The only thing we can do is shut the door and try to be better than we were.”

What’s the best thing about being part of Emarosa?

B- The fans, the friends, and proving everyone else wrong.

You can catch Emarosa on their UK tour this month here: https://bnds.us/s40iem