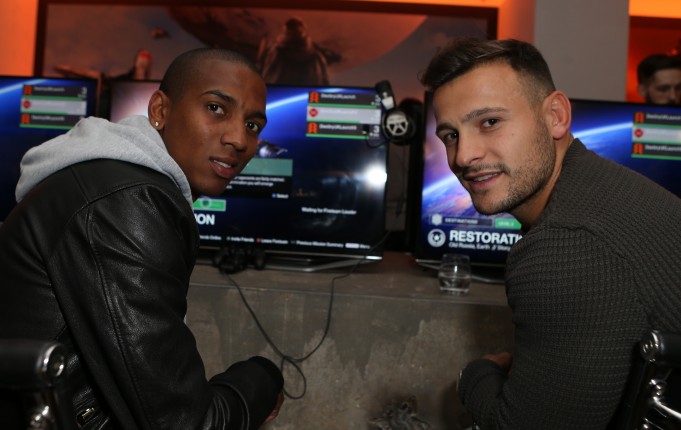 With almost 50 caps for England and over 160 for Harlequins Danny Care is one of the countries most talented Rugby stars. In an exclusive chat with Flavour Magainze at the Destiny launch party we discussed his fondness of PlayStation, his team-mates gaming abilities as well as next years Rugby World Cup!

So we’re here at the launch of the awesome new video-game Destiny, would you consider yourself a gamer?

I definitely would consider myself a gamer, I’d say I’m the Fifa king of Harlequins! I haven’t been beaten for a while. I also love Call of Duty, I’ve never played Halo because it’s an Xbox game and I’ve stuck to my roots with the PlayStation but if it’s a combination of the two then I can’t wait to play it!

So you haven’t managed to get your hands on it yet?

Not yet, I’m eagerly waiting my chance to play!

I saw Anthony Joshua tweet earlier saying that he was going to take you and Ashley Young on… He’s calling you out already!

I know, maybe I won’t go toe to toe with him he’s a big lad! I can’t wait to play it – it looks amazing, sounds amazing… I think it’s going to go mad!

Have you been into gaming for a long time then?

I’ve always been a PlayStation fan from when I pestered my Mum to buy me one. She finally got me one and I’ve loved it since. The girlfriend tries to get me off it but I’m going to practice rocking the baby whilst playing!

You mentioned you’re the King of Fifa at Harlequins. Who else is pretty handy from Harlequins and England?

Minus myself, Ollie Lindsay-Hague at Quins’ is quite a good player and Dave Ward backs himself. Dylan Hartley is always on Call of Duty but he plays on his own, he sneaks off and practices!

Moving onto Rugby now – you have a few massive games against the Southern Hemisphere sides, are you ready?

Yeah – it’s always a real tough task the Autumn internationals. This year we have 4 huge games starting with the All Blacks so they’ve thrown us in the deep-end with that. We love playing in these big games and they’re all at Twickenham. We know how amazing it is playing there each week so I can’t wait to get involved in them if picked, but there’s a lot of Rugby to play with Quins’ before then.

Next year  the World Cup is coming to England, it must be hugely exciting for everyone involved in Rugby?

I can’t wait, it seems like we’ve been waiting for it for so long but it’s just around the corner now. People are stopping me in the streets saying they can’t wait to watch it and be involved with it and I think everyone’s well and truly behind England rugby at the minute. They believe we can win it and so do we, we can’t wait to get involved.

Everyone remembers the atmosphere at the Olympics and the impact the support had on our Athletes. England have a great young team at the moment so are you hoping it can have a similar effect on you guys?

Yeah massively – it’s the next big event to come here. We saw how amazing the Olympics was and how powerful the support was for the home crowd. If we can have anything like that we will be very happy.

At Harlequins you got off to a good start narrowly beating London Irish – what are the teams aspirations this year?

Every year we set a goal of being the best team in England and we’d love to get our hands on that trophy again. It’s been a few years since we’ve got to lift it. We started with a win but it wasn’t a great performance in the second half. The games will keep getting bigger and bigger.

Finally, being a Gloucester lad myself I have to ask you your thoughts on James Simpson Daniels retirement?

It’s really sad news. He’s one of the most gifted and talented players I’ve ever had the opportunity to play against. I never got the opportunity to play with him which was a shame, I’d of loved to play with him. He’s an unbelievable player and Rugby will miss his silky skills and try scoring. It’s a big loss for Gloucester and the world of Rugby.

Danny Care was speaking at the UK launch of Destiny, a new video-game from Activision and Bungie. Destiny is out now on PlayStation 4, PlayStation 3, Xbox One and Xbox 360. To find out more visit http://www.destinythegame.com/