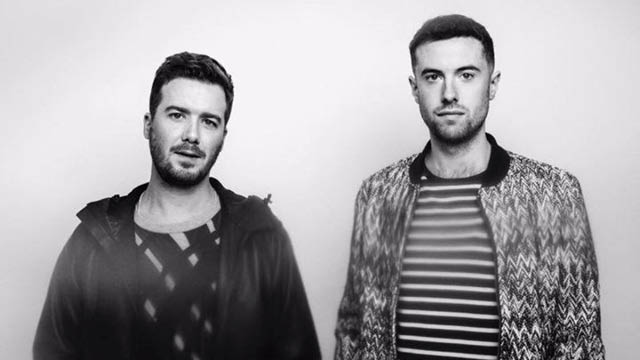 Gorgon City consists of two North London producers Kye and Matt who are mostly well known for their hit single ‘Ready For Your Love’.

Fans were already queuing outside in the hope of getting that prized spot at the front of the stage at Brixton Academy when I arrived on a gloomy afternoon.

I sat down with the guys backstage to chat about their new music and tour life.

Hi guys, how are you? How’s your tour going?

M – Good thank you! We’re just getting ready for tonight! It’s been a good one; we haven’t toured in the UK for ages! It’s good to be back on home turf.

You’ve been producing together for a while, did you decide straight away what kind of music you were going to make or did it just happen?

K- we were actually just experimenting; our first couple of tracks are completely different to how we sound now. I think it was when we made our track ‘Real’ with Yasmin was when we really found our sound.  It defined everything for us because it was really unexpected how much radio plays it got!  It was kind of something that happened by accident. We never expected that!

What do you feel is the most significant track you’ve made and why?

M- I guess ‘Ready for your love’ was a massive game changer for us because it got into the top five and it was a really big mainstream hit! We never had anything like that before, ‘Real’ was a introduction of getting played on daytime radio and getting played by radio stations like capital and kiss but ‘Ready for your love’ definitely changed the game for us. A lot of fans know us best for that track. There are definitely a lot of other songs that I feel more passionate about because they mean something more to me. I do love the song and it’s definitely changed our lives.

How do you go about making new tunes?

K- it always depends what kind of style we’re going for. When we’re working with vocalists, we like to do it from scratch rather than make a whole instrumental track and get them to sing over that.  We find if we do that, it doesn’t sound natural. It sounds like the vocal is stuck on a song. I think when we write together and work with the vocalist; it feels more natural for Us.

Which artists or DJ’s inspired you growing up?

M- I guess the whole UK underground dance music culture was the biggest influence because hearing music from the club and rave scene like drum and bass, garage and stuff like that.  Just hearing that growing up and wanting to learn how to make it yourself and starting to experiment with computer programmes. Working out how it all works really inspired me, I was really interested in learning how to make those kind of sounds.  Certain artists growing up like Michael Jackson I loved.

K – A lot of people say it’s a very UK sound, every time we go to America they say it’s UK House and I guess that does come from our garage, drum and bass influence.

Do you play any instruments?

M- Yeah! I play the guitar a bit; I used to play it as a kid! I think when you start getting into music production and making tunes on computers, you just kind of stop playing an instrument It’s funny because you start making music but you spend all your time actually producing music and all the technical side of it.

You’ve collaborated with a few artists, who would be your dream collaboration?

K- we always do the spud before going on stage

M- Yeah we just say Smash it and then spud, we maybe do a few press ups to get energised. We just chill in the dressing room and have a drink before going on.

If you hadn’t of gone into music, what would your career path have been?

M- No idea, I haven’t got a clue! I can’t imagine not working in music now!

Describe each other in three words

M- He makes his own beer so I’m thinking House Music Brewer.

M- Just carrying on releasing our album kingdom, we’re kind of releasing it bit by bit at the moment. I’m really looking forward to getting the rest of that released. We’re going to be doing some more touring; we have some shows in Mexico

K- we also have a gig in this venue called Red Rocks and it’s in Colorado. It’s crazy; it’s like DJing in a canyon. We’ve wanted to play there for a while. In December we’re taking a whole month off which will be nice because the last few years have been so intense, just touring non-stop.