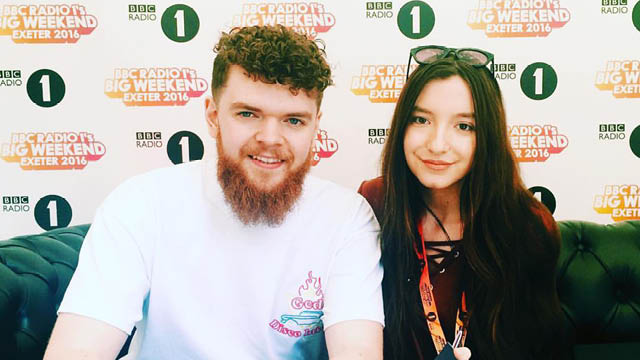 We sat down with Jack Garratt backstage at BBC Radio 1’s Big Weekend Exeter 2016 at Powderham Castle before he went on stage and talked about his new album ‘Phase’.

Can you tell me about your album ‘Phase’?

J- Phase has been a long time coming, It’s been about four years of writing it and producing it and trying to figure out exactly what it is. I still don’t know what it really is but I know that it’s exactly the album I was always going to make! Kind of just by the definition of that it is the album I made.  I’m very proud of it, it’s been a lot of hard work, and a lot of honesty and a lot of patience have gone into that record. I’m extremely proud of it.

Describe your album in three words

J- I don’t think I could, describing things in three words is really hard! It’ s impossible so I can’t! It’s like when people say if there was one song that you could give someone or one song you could play to someone that you think best represents your music which one would it be, I’d be like listen to all of them, say all the words and listen to the music

Your last album was well received; do you feel any pressure when thinking about releasing new music?

J- I don’t think I feel any pressure about releasing new music simply because I’ve only just released a big chunk of music that I’ve only ever released. I’m already working on new material and I don’t usually find myself writing things everyday because it takes me a while to get into the mood of the song or the emotion of something but recently I’ve just been making lots of music which is great so I’m kind of encouraging myself to do that everyday

Did you face any challenges when making your recent album?

J- The biggest challenge that I faced was doing it on my own, I collaborated with a couple of other producers and another mixer on a couple of the tracks and I had a really good friend of mine come in a engineer and produce it in the last couple of weeks of me making it but doing it alone was a really difficult thing but I would still do it again! I want to make it on my own just because I feel that I can be the most creatively free on my own but yeah it is difficult

Who was your main influence while growing up?

J- my main influence growing up would have been Stevie Wonder, I listened to everything of his I could find when growing up and I still do now! I still try and find everything about him that I don’t know like all the music he’s made that I don’t know of already. He’s incredibly inspirational to meet and growing up as a musician just seeing someone who was able to write the kind of music that he wrote and then perform it in the way that he would perform it and kind of just dictate his own version of pop music every time, he never wrote a song that sounded like anyone else but him

If you could collaborate with any other artist who would you choose?

J- There’s a rapper in Chicago that I’m obsessed with, a guy called Chance The Rapper, he just released colouring book and I’ve been a fan of his for a really long time, we’ve always said we would like to work together but that’s never come together but I would love to do that!

J- I think that would have to be a song called Fire, only because it does everything in it and it’s terrifying to play! It stresses me out to play but that’s kind of where the performance comes from is the fact that it is so stressful to perform.

Do you have any preshow rituals?

J- Just a lot of Jumping around

J- only when things have completely broken and when stuff just doesn’t work! That has actually happened a couple of times; touch wood it doesn’t happen today

What is the most important thing you’ve learnt as an artist in the past year?

J- Self-respect is incredibly important when creating something, if you don’t respect yourself for creating it, my belief is you shouldn’t then share it to the world because you should have nothing but the truth and love for everything you make and then other people will find truth in the things that you make as well.

If you missed the performances, you can listen back via the Radio 1 website and watch big weekend’s highlights on Radio 1’s Youtube channel.