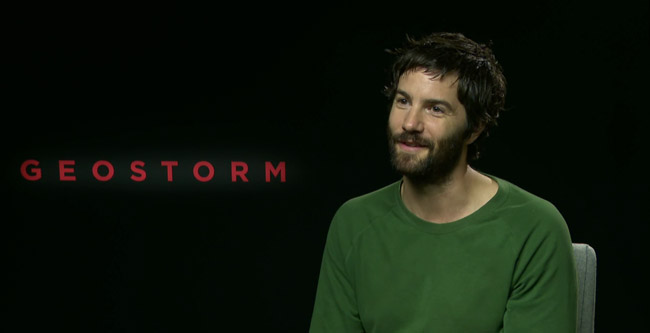 In this week’s release of Geostorm, Brothers Jake (Gerald Butler) and Max (Jim Sturgess) have to put aside their differences in order to save the world from the very satellite Jake built to help control the world’s weather before it wipes out thousands of people.

We were lucky enough to get some time with one half of the planet-saving duo, Jim Sturgess for an exclusive chat about the film. Watch the interview below.

Geostorm is in cinemas 20 October

After an unprecedented series of natural disasters threatened the planet, the world’s leaders came together to create an intricate network of satellites to control the global climate and keep everyone safe.  But now, something has gone wrong—the system built to protect the Earth is attacking it, and it’s a race against the clock to uncover the real threat before a worldwide geostorm wipes out everything…and everyone along with it.

Geostorm has a cast that includes Gerard Butler, as Jake, a scientist who, along with his brother, Max, played by Jim Sturgess, is tasked with solving the satellite program’s malfunction. Abbie Cornish (“Limitless”) as Secret Service agent Sarah Wilson, Alexandra Maria Lara (“Rush”) as Ute Fassbinder, the ISS astronaut who runs the space station, Daniel Wu (“The Man with the Iron Fists,”) as Cheng, the Hong Kong-based supervisor for the Dutch Boy Program, with Oscar nominees Ed Harris (“The Hours,” “Apollo 13”) as US Secretary of State, Leonard Dekkom and Andy Garcia (“The Godfather: Part III”) as U.S. President Andrew Palma.