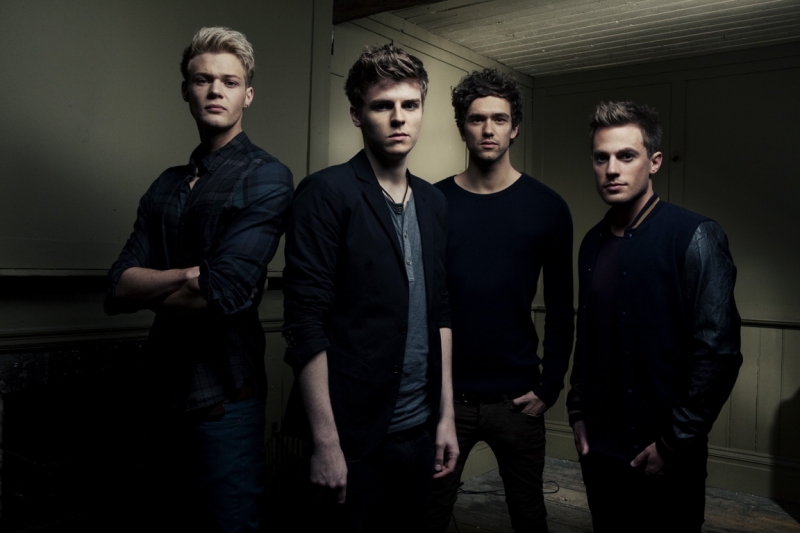 You probably have heard one of the infectious singles from their hugely successful debut album ‘Chapman Square.’ It was in the top five album charts for seven whole weeks. The album chewed up the pop world and kick-started the renaissance music careers of Lawson. Joel Peat, the lead guitarist in the pack describes himself in his Twitter bio as the “gitfiddler.” At present he’s probably somewhere fiddling with his guitar, having to prepare for the bands forthcoming headline tour.

With their killer new single ‘Learn To Love Again’ currently going for gold, Joel filled us in on everything, including his lowest moment before hitting it big time and revealed why it’s not difficult to be in a relationship with someone who cares less about his fame. We also discovered which member throws the biggest diva tantrums and why they would like to work with Justin Bieber, B.o.B and Tinie Tempa.

Okay, why Lawson… Are you a fan of Nigella Lawson? What is the origin of your name?

You can’t not be a fan of Nigella Lawson, but unfortunately, it’s not about her. The lead singer of the band Andy was diagnosed when he was 19 with a brain tumour so we wanted something that really meant something to us, and the guy who basically saved his life was called Doctor Lawson. We were playing with the idea of calling ourselves Doctor Lawson, but it sounded more like a German techno band, so we instead settled for Lawson.

You guys seem really close. So let’s go back a bit. How did Lawson get together?

We were all doing our own things, playing guitars and different instruments for quite a few years. After Adam (the drummer) left Music College, he was looking for singer-songwriters to play drums for on Youtube. He sort of bumped into Andy’s stuff which he really liked and messaged him saying, ‘I love what you’re doing, if you ever form a band can I be in it?’ I have known Ryan (the bass player) since I was 14, we both lived near each other back up North. We all kind of just came together after a couple of rehearsals, but it’s truly amazing as we had quite a few years of doing really small gigs around the country.  We feel very lucky to be doing what we’re doing now.

Any touching or surreal moments that will forever remain with you?

The day we got sign was quite a big deal. I remember Andy not having anywhere to live and was having to sleeping on the floor in my living room. I can remember hearing him from my bedroom on the phone talking to this guy who we had been in contact with, and he basically rang to tell us that there was this huge record label that wanted to sign us as a band. I literally remember crossing my fingers hoping this was our break and it actually turned turned out to be. Another surreal moment has got to be playing London’s 02 and the Wembley arena.

Who is the troublemaker in the band and who is the peacemaker?

To be honest, we’re all pretty bad because we spend so much time together. We’ve got our own sense of humour that no one else really understands, which at times can be quite awkward for other people. In rehearsals, especially for our tour coming up, we tend to lose it quite easily mainly because we are a band. Sometimes we may end up playing random songs and chilling out for ages, but thinking about it Ryan is probably the guy who causes the most problems.

What was your darkest period before hitting it big and did you ever almost give up?

I have never really thought of giving up, but there was a time when I was working in a restaurant [rest of the members being to laugh]…There were a couple of times when we all sat down and thought ‘What are we doing?’ ‘We’ve got no money or no jobs.’ We were doing gigs in pubs and clubs playing covers, so it was dark at times but I don’t think any of us ever wanted to give up.

Now that you are getting well-known, do you find that it’s hard to find a girl who might care about you and less about your fame?

I wouldn’t say it’s hard, but I suppose it can be hard in some ways to keep a relationship. I have got a girlfriend so it’s not that difficult, but I just have to stay in contact a lot, which can be difficult as we are away all the time. We won’t even be in the country for most part of this year, so with that you just have to play it by ear. I think what is needed to be able to make it happen is a lot of understanding on both sides.

So, are JLS and The Wanted: friends or rivals?

To be honest, we’ve known JLS for a while – they are nice lads. We met The Wanted when they played the 02 last Christmas and they are really great lads as well. Everyone is really nice but people always seem to ask us the question, ‘Have you ever met anyone that’s been a right d—khead or anything like that?’ The answer is no. I know some stuff went on with Robbie Williams where he said something about us, but we met him and he was a really lovely and down to earth guy.

You guys have been on tour with The Wanted – what was that like? Are they as badass as they’d like us to believe?

We have had a couple of nights out with the lads and they can definitely handle their drinks.

I know you all write most of your own songs, but what is the weirdest object you’ve ever written a song lyric down on?

I once wrote on my hand all the way up to my shoulders and afterwards, I ended up looking a bit like a weirdo.

Who’s the ladies man in the group?

We’re all big fans of the ladies, but you can’t really argue with the frontman. You can never ever get past that; you’ve always got to give the frontman his fear due, so I think Andy does well with the ladies.

Okay, so let’s talk about your new single ‘Learn To Love Again’.  What’s the inspiration behind that song?

We’ve all been in relationships with break-ups and sometimes you kind of think about the idea of getting back together for whatever reason. After time apart from each other, ‘Can you learn to make things happen and learn to love again?’ I think if you can pass those things and have a bit of forgiveness, I think you can and that’s what the song is all about.

In your eyes, what is the meaning of love?

I think it’s when you can’t stop thinking about someone and you always want to be with them. Sometimes you just connect with somebody and I think it’s that clique which makes it really special.

There was a rumour of a collaboration with Justin Bieber. Can you confirm or deny?

That kind of got blown out of proportion. There was a studio which we were using to record our album in LA, and Justin Bieber was next door, as he also uses the same studio quite a lot. We previously met him before that and he is a lovely guy, but we would love to do a song with him. I don’t know how available he is but a collab with him would be really cool.

Are there any others artists out there that you would also like to work with, besides Bieber?

We’ve got a new song which we wrote recently and we are hoping someone like Tinie Tempa or B.o.B will come on as there’s a perfect bit in the song, which they would really fit. If not, maybe a female vocalist like, Jessie J, Rita Ora or Taylor Swift, who would fit nicely with Andy’s vocals. We are having some discussion at the minute to see what we can do for the next couple of singles.

Is anyone in the band known to throw diva tantrums?

We all kind of bring each other down to earth a little bit. However, I have known Ryan to kick off a few times [Laughs]… No, we’re not divas at all. We tend to keep our heads down and get on with it, as we are really looking forward to getting out there on this tour.

Lawson’s new single, ‘Learn To Love Again’, is out on 3 February. Click here to find out more about the Chapman Square tour.