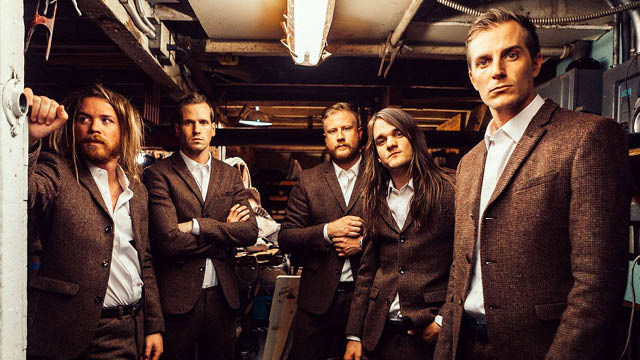 Before The Maine’s sold out show at the Koko Club in Camden, I had the pleasure of sitting down backstage with the guys to ask them a few questions about what it’s like being a band for 10 years and their latest album ‘Lovely Little Lonely’.

Watching The Maine for the first time was incredible! John praising the crowd as not one mobile was in sight “None of you paid fucking money to watch the show from your computer later, Enjoy the show”.

It really felt like an intimate concert! This is the real shit and exactly what every concert should be like!

You guys are celebrating your ten-year anniversary as a band this year, how does this feel? Has anything changed or remained the same since you first started?

Pat – We know what to expect when we go on tour now, we played here 7 years ago back in 2010 and now we are back the same people, we don’t really notice what goes on around us.

All your previous albums were well received; do you feel any pressure when releasing Lovely Little Lonely?

John- Maybe a little bit it felt like American Candy, our fans really latched onto it, it was like a breath of fresh air and excitement, I think there is a little sense of pressure that goes into every release, as you don’t know if it will be your last.

Do you feel your music has changed from when you first started?

Pat- Oh I hope so, we don’t go out to recreate anything that we have done, I think that every record we release we attempt to do something different, I think there is always going to be some thread of consistency because of who we are, each time we are trying to do better. When I go back and listen to the first record it feels distant, it feels like a different band almost, so I think there has been a big change, we are definitely different people from ten years ago.

What has the fan reaction been like on this tour?

Kennedy- Insane, when a song from the newest record becomes the most important one of the set and the most energetic of the night it feels really good for us because usually, it takes a long time, people have an emotional connection so it’s kind of a nostalgic factor that makes them get more excited.

What is your favourite track to perform live?

Pat – Mines got to be Bad Behaviour

You played Slam Dunk this year how did it compare to other festivals?

Do you think you have achieved everything that you aspired to when you first started ten years ago?

Pat – When we first started I think for years and years it’s been well past what I ever thought was possible but then every time you get to where you think you want to be things just get better.

What’s the most important thing you have learnt as a band?

John- Just to have fun and keep enjoying what we are doing, we are serious most of the time but life is not meant to be taken so seriously.

What has been your proudest moment?

Jared – Just being a band for ten years is huge for us.

What’s next for The Maine, will we see another ten years?

John – Yes, hopefully that is the plan, we will be going back home hopefully to do another tour and recording new music, we will just keep going.