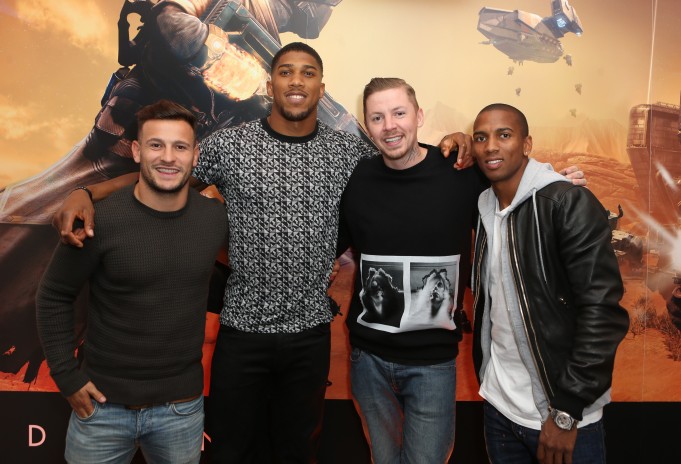 With over 200 Premier League appearances and 30 England caps to his name Ashley Young has excited football fans with his pace and flair for some time. After enduring a tough time last season with the rest of his team-mates Ashley Young has seen some what of a return to form under new coach Louis Van Gaal as the left wing-back in the Dutch-mans favoured 3-5-2 formation. Flavour Mag sat down for a quick chat with Ashley at the launch party of the new video-game Destiny.

So we’re here at the launch of Destiny so I imagine you would consider yourself a gamer?

Rio Ferdinand is always posting videos of when you guys go away for England duty playing video-games – who’s the best gamer in the team?

I don’t know to be honest, there is so many players that play. Everyone thinks they’re the best, there is a lot of competition!

Rio always thinks he’s the best at everything, its quite funny! But it was good to come down to the launch today and get to play the new game. From the second I got in I was asking ‘Can I play the game?’ The graphics and everything about the game look fantastic!

Apart from Fifa and Destiny what else will you be playing in the next few weeks?

A bit of Call Of Duty and Fifa but Destiny is definitely the one I’m going to be playing – the competition and co-op play will get quite intense!

Its a new era for Man United. You have a new manager and some new players – what do you predict for this season?

We’re obviously going to try and win the title. We had disappointment last season but we’re not thinking about that. I think a lot’s been said about the first 3 games and us only getting 2 points but people need to realise its only 3 games. We’re going to get much better and stronger, we’re playing a new system and the new players have to adjust to that. It’s not going to be a quick fix – it’s not going to take a day, week or month. Its going to take time for us to adjust and I’m sure we’re going to be fighting for the title come the end of the season.

For United fans it’s been an incredibly exciting transfer window. Falcao and Di Maria joined whilst Danny Welbeck has left for Arsenal. Were you disappointed to see Danny leave?

Of-course, it’s always disappointing when players leave the club, but we’ve brought players in. We say good luck to the lads that have left and were delighted to have signed the players that we did. A lot’s been said that United cant attract the big names and the world-class players but look at this transfer window. Its fantastic for the club and it can only add strength and depth to an already good squad. We look forward to the rest of the season now!

Ashley Young was speaking at the UK launch of Destiny, a new video-game from Activision and Bungie. Destiny is out now on PlayStation 4, PlayStation 3, Xbox One and Xbox 360. To find out more visithttp://www.destinythegame.com/