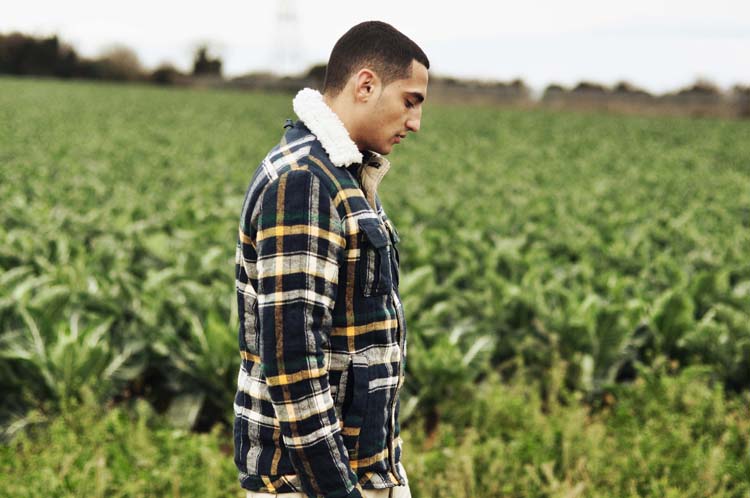 On the strength of his Fire in the booth freestyle, Mic Righteous has firmly positioned himself as one of the most complete rappers currently on the UK scene.  Having already conquered the underground sphere as well as working with the likes of Cher Lloyd, Naughty Boy and K Koke, Righteous is now ready to break into the mainstream with his new single ‘Hold Me Down’. We caught up with the out spoken rhymester to talk misconceptions, movies and to find out what triggered an explosive brutal diss track aimed at DJ Tim Westwood.

What is your writing process like? Words or music first?

Usually the beat is what brings the words out of me. I might go and meet one of my producer’s maybe Preston or TDH, and they’d be like ‘Yo Mic, check this out I made this sick beat for you,’ and I’ll say ‘Alright then let me hear it.’ When the beat is played to me; I usually do this weird thing where I start freaking out, and that’s how I start writing.

Do you have to be in a particular place at a certain time? Or with a certain candle burning?

Not necessarily but there are places where I write better than others. I usually go to Preston’s quite a lot because he’s got this room in his house and I don’t know what it is, but every time I go there I end up writing some of my best sh*t. Even so, it doesn’t matter where I am as I can write anywhere.

You recently made your acting debut in ‘Offenders’. What was that experience like?

It was only a quick cameo, but I really did it as a favour for Frank English. They wanted some rappers in there just for that surprising element so people could be like, ‘Oh look there’s so and so.’  It served its purpose quite well, and I think it was good for me as I always thought about doing some acting.

Can we expect to see more of you on the big screen?

Yeah, but I think I might have to improve my acting skills. I am not a great actor, so I’d have to get more confident in myself before I audition for Eastenders or something… [Laughs]

For people who listen to your music and think they know you, besides the misconceptions what kind of person are you?

Some artists think they have to have this great madness that comes with a sort of genius in order to have a perfect balance.  I think that’s a cliché as I like considering myself as a normal guy, who can write lyrics really good.  I also like to go out, chill with my mates and play a bit of football on a Sunday. I don’t really want to be seen as someone or something that I’m not. What advice would you give to your 18-year-old self?

[Pause] I would probably have told myself to get out and socialise a bit more. That would be the only advice. I don’t really hold regrets and  think about what I could have done better as I like to look more towards the future.

You had people talking earlier this year, after disclosing your feelings in the video [Sack City] about Tim Westwood. Is there still unfinished business between you two?

There wasn’t much business to begin with. The problem wasn’t his business in the first place, but he made it his business, so I had to shut him down real quick.  So that’s the end of that little saga. A little bit of advice, in certain situations you know you’re never going to win the war, but you can win the battle. I think I won that battle, but I was never going to win the war.

For those who don’t know, tell us exactly what happened between you two?

Myself and Devlin had an altercation of our own, which was nothing to do with Westwood. So we came to the agreement, that everything was cool. After that, I heard Devlin in an interview with him [Westwood] saying I am not his favourite rapper, but he respects my little hustle. To me, it was like a backhanded compliment with a bit of sarcasm, and I knew exactly what he was doing because I know Devlin and what he’s like.  So I played along with it and went on Twitter and was asking people, ‘What do you think about this?’ ‘Do you think I should go mad about it’, in the end, I still went mad about it. People were like, ‘He’s mugging you off’, but I didn’t need people to tell me that, as I already knew he was mugging me off.  I just wanted people to know, so if I did come out and attack him, it didn’t seem like I was attacking him for no reason.

Westwood then went on his show the next day saying he had been on my timeline, and he saw all the f*ckery that I was saying.  He starts taking the p*ss out of me and my ends. If I’m going to be brutally honest if this was on the road and someone was shouting abuse at me, I’d go and bang them out. I wouldn’t even stand there and talk to them. I couldn’t do that because of the position I am in now, so when Tim said all this stuff about me, I dealt with it the only way I knew how and fortunately for me it just happened to be the best time of his career.  If I had released the video eighteen months ago, I would have been in a whole lot of trouble. It’s at a point where no one really cares about him so Tim if you’re reading this, ‘Your old bruv no one cares about you alright.’

If you bumped into him after this interview, what would you say?

I would hold his hand, help him cross the road and make sure he gets home safe [Pause]… You know that’s a lie, right?  [Laughs]

Your new single ‘Hold it down’ is very different to your previous material. What inspired the change in formula?

I think it was the change in production. ‘Hold It Down’ was me working with a full band, alongside loads of guys who really know how to play instruments.  These are guys who know about all types of music so it was an element of bringing their sh*t into mine.  I think it worked really well as a warm up single giving everyone a taste of what’s to come. The main attractions on the new EP [Open Mic] are going to be the more crossover stuff like ‘Ghost Town’ and ‘Up All Night’.

You mentioned ‘Up All Night’. Other than sleep, what other sacrifices have you had to make?

I sacrificed a boxing career, social life, relationship, time with my family and my son.  There’s loads of stuff that forces you to make these kinds of sacrifices, but in the end, you know it will all work out.

Tell us about your new EP ‘Open Mic’…

‘Open Mic’ is us trying to broaden the fanbase but at the same time upholding the fans who have been here since day one. It’s a bit of Mic Righteous trying to bring in people who wouldn’t normally listen to my music, and that’s why I called it open mic. If you go to an open mic event, anyone can showcase their talent, and it doesn’t matter what they look like. I’m not going to seclude anyone no more because I want everyone to be able to listen to my music.

Having achieved so much. It is harder now to motivate yourself then it was when you were on the streets?

No, not really. I think when you’re in the streets it’s easier to motivate yourself because you’ve got that inspiration there driving you to go out and get what you want.

The EP ‘Open Mic’ is available to pre-order [here].

Why’s Mic Righteous also talking about eating cornflakes with tea and some of the craziest things women have done to him (well, not exactly in that order)… But take a listen below to hear him playing our ultimate game, which uncovered a few other revealing truths.