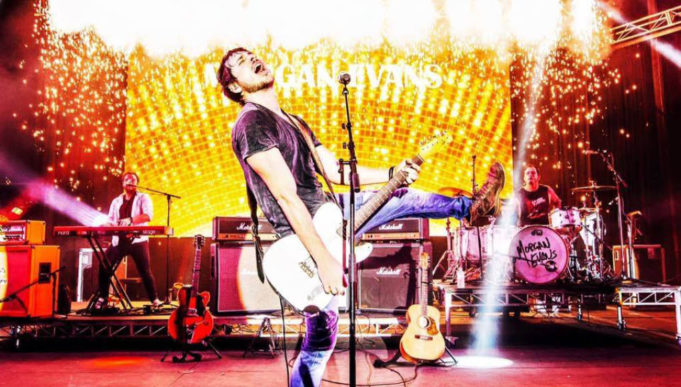 I sat down with Australian Country music star Morgan Evans at Warner Music in London last week ahead of his performance at C2C.

The country festival is held at the O2 Arena yearly and debuts the worlds best country acts to loving country fans.

For people who don’t know you please can you tell us a bit about yourself?

I grew up in a place called Newcastle, the second Newcastle in Australia. I play the guitar and sing! I also write songs and I moved to Nashville officially three years ago! I just put out my first single called ‘Kiss Somebody’. I’m stoked to be back in the UK and I can’t wait to play C2C, as it’s my first time!

It’s country music and I’m heavily inspired by Keith Urban but other people like Ed Sheeran inspire me as well! I grew up on a lot of pop-rock music. Ooh, I would say doing something with my wife would be good! John Mayer and Ed Sheeran would be pretty cool.

How did you get into Country music, as a lot of people want to be a Pop/Rock Star, what inspired you to go down a different route?

I grew up listening to my parent’s records and I have six main records that define my childhood, Led Zeppelin IV, Creedance Clear Water Revival, the Eagles Best of album, Nitty Gritty Dirt Band, Glen Campbell and Garth Brooks. It’s a full mix of Country and Rock but when I was a kid, I didn’t know what country and rock was, I just knew that I liked all of that stuff! When I started making music, I was in a band and we played everything! When you’re thirteen and you play punk one-day and metal the next and eventually everything ended up sounding country.

Yeah actually! I was on stage in a place in Texas, just outside of Houston and there were around five thousand to six thousand people there, I went on stage and played with the loop pedal, it was half hour set and nothing worked. I didn’t have any crew or anything so I was just standing on stage, I didn’t know what to do so I just started telling jokes and I ended up singing the American National Anthem and I have no idea how I knew that! It was a very embarrassing set but it was super fun!

I just like to be by myself and play! I want to be able to get into that headspace before going on stage.

Can we expect some new music this year and maybe a tour?

Absolutely! We were having a meeting at the agency this morning and I’m coming back real soon! I’m not holding dates back from you, I promise. We’ve got new music coming out at the end of this month and so on! Hopefully a full album in summer, late June/early July!

I miss my family and my old friends, you can’t make old friends! I have great mates in Nashville but it’s not the same with friends that you went to school with!  I miss the beach but at the same time, I’d pick Nashville every day! It’s the best city to write music in.

I’m on the road the entire rest of the year!