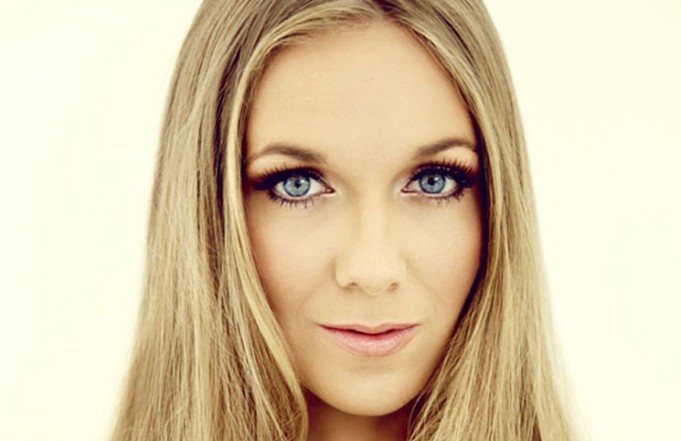 From Joker featuring Lil Wayne, to John McLaughlin, Beth Sherburn is making a name for herself in the music industry.

First spotted singing along to Michael Buble, Beth is now shooting videos in Ibiza with Carly Cussen, ho has worked with the likes of Olly Murs, Ed Sheeran and Little Mix. We take time out for this extensive and exclusive interview with Beth Sherburn.

Hi Beth, how are you?

I’m great thank you hope you are too!

Your jump from shop assistant to recording artist is not normally the route encountered into this business. What actually happened on that day?

‘I have always wanted to get in to the music business – I’ve always worked hard behind the scenes…but I can’t believe it happened to me at work. My lucky break came before Christmas 2012 when I was spotted working in Debenhams by a record producer whilst singing along to Michael Buble ‘At first I thought he was just messing around, but then I started to realise he was serious. I couldn’t believe it when he said to me he was a record producer, and told me who he had worked with… He came in the store to get his wife some perfume, so I was very lucky to be in the right place at the right time. How has life changed for you since meeting John McLaughlin?

My life has definitely changed it has given me the opportunity to work on my music and to work with many amazing people in the music industry! I have also travelled all over world recording my album!

John McLaughlin has worked with some of the biggest names in the UK scene such as Cheryl Cole and Take That. How does it feel to have your talent noticed by someone like John?

It’s an amazing feeling… Like I said music is always something I’ve wanted to do.. Before I got spotted I’ve always worked really hard on my music….I always participated in local/national competitions from a young age, I performed in musicals (Don Quixote) starring alongside George Costigan and Matthew Kelly.. Attended music/choir workshops, singing and piano lessons as well as performing at many world-class venues such as The Royal Albert Hall, NIA Arena, Manchester Arena

Your first international track “Joker”, written by yourself, is due for release next month. Why did you decide to release this track first?

This song is very special to me…..it was one of the first real songs I wrote… and I think a lot of people can relate to it, Joker is really catchy and a perfect song for summer!

“Joker” feats super star rapper Lil Wayne. How did this come about?

I was working on Joker in the studio with my production team and they knew Lil Wayne’s management they sent the track over and He loved it! It’s amazing that’s he’s featuring on the track! Other than Lil Wayne, who would be your top five artists that you would love to collaborate with?

I Love Beyonce, she’s the ultimate diva! The energy she creates on stage is incredible! And Jay Z is a genius! I was lucky enough to see them perform together at the 02 and for me seeing them sing together was the highlight of the Mrs Carter Show…

Britney – I loved listening to Britney whilst growing up!

Pharrell Williams- his music is just so cool I love his sound! I love singing an acoustic version of ‘Happy’

“Joker” is written by yourself and it comes from the heart. Tell us more?

I think every girl goes through this really. I mean you have problems with a guy and you think you’re serious in a relationship when, basically, he’s just acting like a player you know, a Joker. Like i said I thought I’d write a song where everyone could relate to it! These kind of players tell you everything you want to hear, and you find out what he’s really like…that was the influence…

What advice would you give to other songwriters, coming up in the game, when it comes to putting pen to paper?

Just be you…write what’s from the heart! Never be afraid to show people your work! Attend writing workshops, local gigs, this all helps you to develop your songwriting ability!

When did you start writing and what writing methods do you follow that help you create hits?

I started writing when I was around 13 years old… Everyone is different when it comes to songwriting. I generally have a lyric with a melody that suddenly appears in my head! (This is why i always have a dictaphone in my bag.) The piano helps me to structure the song and then I develop my ideas when I am in the studio. All my songs are based on life experiences; whether this is my own experiences, friends, relationships or good nights out… What artists have you currently written tracks for?

I’ve written songs for upcoming artists which is very exciting!

Being a songwriter yourself what other writers inspire you?

There are many artists over the years that have influenced me musically, when I was younger my parents used to listen to Dusty Springfield and Carole King, Michael Jackson and Alicia Keys the latter of which was my initial inspiration to write songs. I then fell in love with the divas of the music industry such as Tina Turner, Celine Dion, Whitney Huston all the way through to current icons like Britney Spears, Beyonce and Rihanna.

Who would be your top five songwriters that you would love to create a hit with?

Beyonce – I just think she’s an amazing talented performer and her songs are timeless..

Alicia Keys – I just love her songs and she inspired me to play the piano and write music..

Lionel Ritchie – he has written so many classic songs! I love going to see him in concert!

I would love to work with Timbaland… he’s a genius he has written and produced so many classic songs..Justin Timberlake’s ‘Cry Me A River’ is still one of my favourites! And I love Beyoncé’s single ‘Grown Woman’ which he co-produced also!

You have recently returned to the UK from Ibiza where you shot the official video for “Joker”. How did the video concept come together?

I was lucky enough to shoot the video in Ibiza and it was directed by Carly Cussen, she’s worked with Olly Murs, Ed Sheeran and Little Mix so it was amazing to work with a talented team! If you watch the video you will see there’s a story behind it…there’s a lot going on in the video, my favourite scene was the driving the quad bikes!

Unfortunately Lil Wayne does not make an appearance in the video. How come?

Unfortunately he was just too busy with other commitments in America….but The fact he is featuring on the single is amazing…hopefully I will get to meet him soon when in America!

What has the feedback been like from the fans and the public for “Joker” so far?

I would like to thank everyone for their support because it really has been amazing! The response I’ve had with Joker has been overwhelming! I’ve recently performed the song at a few events now ( London, Bham Pride, Thorpe Park) and I’ve definitely received amazing energy from the audience when Singing Joker! I’m really happy with everyone’s response!

We heard you recently caught up with Cheryl Cole after a performance for some business advice. What did the nations sweetheart and TV judge have to share?

I met Cheryl backstage, she was really nice and gave me some great advice on the writing side of things….she also told me to stay focused and to keep working hard on my music..

Do you currently have a second single in the pipeline yet?

Yes i have a second single ready and I have been Working on other songs .

Any news on an album release yet?

Yes my album will be out later on next year! I can’t wait for you to hear more material!

You have recently performed next to artists such as Katy B, Conor Maynard and Kimberley Wyatt to name but a few. How does that feel to perform alongside these big names so early on in your career?

It’s amazing! It was so lovely to meet everyone, and the crowd were overwhelming! Kimberly Wyatt was really nice to me saying she couldn’t wait to hear the single..and Sarah Cox heard it when I performed at Birmingham Pride and she loved it!

Where can we catch you performing live in the next coming months?

I have previously been touring schools in the UK! And recently performing in clubs and on live radio!! I have more summer festivals lined up and I will be touring around the UK in September…I will be announcing dates on my twitter page @thebethsherburn very soon 🙂

Who would be the ultimate artist that you would love to share the stage with and perform live with?

It would have to be Beyonce! Her performances/shows are so inspiring to watch! It would be amazing to perform with her! I just love her…

What does the rest of 2014 have in store for Beth Sherburn?

I am currently working on my album and excited to be touring around the UK later on this year!

Finally can you give us a Beth Sherburn, Flavourmag EXCLUSIVE?

I am writing for some big artists at the moment…I’m really excited about it!

Beths brand new track “Joker” is now available for pre order here – http://goo.gl/jqqBB7. Make sure you grab your copy as it’s a sure-fire hit! We already have ours on repeat! To keep up to date with all things @TheBethSherburn and @Flavourmag make sure you hit the follow button on Twitter.