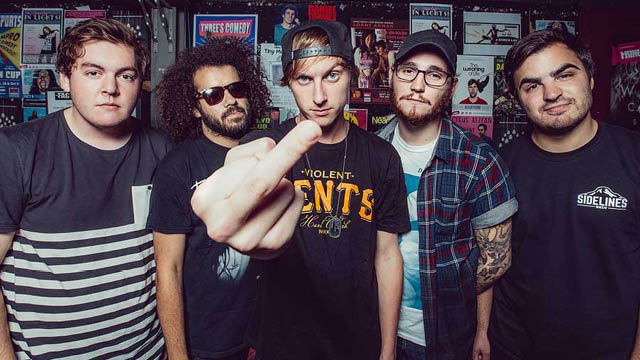 I sat down with Derek and Tyler from State Champs at their London show at the Kentish Town Forum to talk about their new album ‘Around the world and back’.

If you don’t know who State Champs are, you’ve definitely being hiding under a rock. State Champs are a Pop-punk band from America smashing the UK and are ready to show us what they’re all about! State Champs recently came off tour with Neck Deep touring all around the UK.

Your new album ‘around the world and back’ was well received; do you feel any pressure when releasing new music?

D – Well maybe a little bit because it was our second one, we had our first one under our belt. It was pretty well received so we were ready to experiment with new things on this next one and take it a new level. That’s what we did.

T- Yeah there was definitely an expectation for us to deliver again and I think we don’t get freaked out by it, We kind of use it to make a really record and it drives us to be better and to try harder.

D- Nothing particularly planned yet but we aren’t going to wait too long before we start thinking about it. I think we have a couple of ideas and some tricks up our sleeves like later this year.

D- a lot of everything really, Myself and Tyler even used to play in some Metal and hardcore bands when we were younger but then we always like had a little passion for older pop-punk like Fall Out Boy, New Found Glory and the Starting Line. Even today I’m a big pop music fan so I could say even Justin Bieber, Katy Perry and yeah even One Direction and The 1975. They all give us that fire to be as big as those kind of artists are and to see it kind of happening to us right now is really exciting. There’s a lot of Pop-Punk bands around at the moment, what makes State Champs stand out?

T- I don’t want to sound to full of ourselves but we definitely try to push in different directions and I think we are pretty much pop influenced which a lot of people aren’t. A lot of people want to be fast and be like cool, we don’t really give a shit.

D- Yeah, I think a lot of the Pop-punk bands try to be very edgy and very punk influenced.

T- they try and be like other Pop-punk bands.

T- and it’s like that kind of mentality comes across in our music and resonates within people because they know it’s not phoney and they not it’s not because what’s cool.

D- Are we suppose to say the UK?

T – I do like the UK, the only part is the no sun thing and I would love to see the sun.

D- I would like to see a little bit more sunshine here. I heard there is like one day of sun and everyone just goes crazy but talking about sun though, I love touring Australia! All the shows are always great and it’s just the weather and the people. I do love the UK; we’ve had some of the biggest shows here.

Where would you like to take this tour that you haven’t been already?

T- I wouldn’t mind going to Ireland! Dublin and Belfast, which would be nice.

D- Yeah, we do love going there, we didn’t get to go on this tour and even some places we’ve never been too ever like Brazil and some of South America, South East Asia and stuff like that would be really cool for us, I’m sure we will be there at some point.

What’s your favourite song to play on tour?

T- I think mine would be our song ‘Secrets’ because it’s really fun and new! It has that shiny new car feeling.

D- For me, I would probably say our song ‘Losing Myself’. It tends to go really well being a faster song on our album. It gets the crowd moving, like it gets mosh pits and circle pits going and when the chorus hits, it gets everybody jumping and it’s really cool.

T- I have really bad balance so whenever I try and do anything I almost fall over. I don’t think anybody ever really notices but it’s just a bit embarrassing when you have to catch yourself from actually falling over. There was like almost two thousand people who just watched me.

D- I think we’ve had a lot of close calls and then there’s the rare actual you know.

I – At least you didn’t fall off the stage like Michael From 5 Seconds of Summer.

D- I also didn’t burn my face off!

D- but we pull it off though.

D- I think when we just released this new album, we never really had any expectations with like charting or the billboard things or like doing any sort of awards or getting any big plaque that say you’ve sold this many and so on. The fact it was so well received and it done well on the charts! We sold way more copies than we thought it would on the first week given that people don’t really buy music anymore, everybody is downloading it now illegally so the fact that loads of people supported us through the album is really cool, it’s great to know people care and are connecting with it.

D- we did an arena tour in Australia, that was cool! We got to play to 10s and 20s of thousands of people that was opening up for 5 Seconds of Summer. It’s a crazy sight, it’s very nerve-racking at first but once we got a show or two in, we thought we could get used to it very quickly. We had a really good time doing that.

T- my bed, I’m not kidding my bed is the sickest bed.

D- I usually miss my mum the most because I’m a huge mummy’s boy! I have to call her and text her everyday and send her pictures otherwise she gets mad at me!

What’s the most important thing you’ve learnt as a band in the past year?

T- most importantly I’ve learnt that and I think everyone will agree is to relax. I’m a pretty high-strung individual and being in the band has really helped.

D- Myself and Tyler are polar opposites and we kind of help each other in the sense of calming each other down and making ourselves aware of things we have to get done and feeling a certain way about things and being a little more passionate so it’s worked all the way around but moral is a big thing with us and to make sure we are having fun and on the same page.

Will we see State Champs at any UK Festivals this year?

D- I can’t say but you definitely will!

D- 2016 is our busiest year and we are having a good time and we are going to grow and have fun so we are ready for it and I hope everybody else is!